On November 14, 2012, the Hellenic Air Force conducted the LIVEX (Live Exercise) “Sea Griffin 2/12” at a firing range located near Crete, in the Aegean Sea. 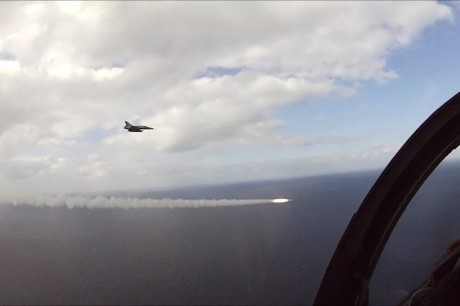 Then, two F-16 Block 50 from 347Sq./111FW fired AGM-65 Maverick missiles and an attack helicopter fired a AGM-114K Hellfire missile before the target sunk.

This is the second time in few months that HAF helds a “Sea Griffin” drill: on May 31, 2012, several Greek platforms belonging to both the Air Force, Army and Navy were involved in a live firing activity against a target ship.

F-4 low passage after take off

A few days ago I’ve published a dramatic picture of a Tornado ECR perfoming a low level passage after take off from Cameri here http://cencio4.wordpress.com/2009/03/25/low-level-tornado-ecr/. Those who commented the picture have different opinions: some believe […]