It looks like Iran’s new UAV (unmanned aerial vehicle), disclosed by recent pictures and, more in details, by the footage recently aired by Press TV, has nothing to do with the U.S. stealth RQ-170 captured in December 2011.

Although the details of its internal equipment, sensor array and ground control station are still unknown (therefore it’s almost impossible to rule out the possibility that the new drone has some features in common with the Sentinel crash landed last year) the new “Shahed 129” is largely based on the Israeli Hermes 450 model, rather than the Sentinel.

Same shape, size, landing gear type and performance. Only the wing mounting is slightly different from the Israeli MALE (Medium Altitude Long Endurance) spy robot, but quite similar to the one of the Watchkeeper WK450, the Hermes version used for Intelligence, Surveillance, Target Acquisition and Reconnaissance (ISTAR) purposes by the British Army.

The new remotely piloted vehicle is claimed to have an endurance of 24 hours and an operative range up to 2,000 kilometers. Noteworthy, unlike the Hermes or the Watchkeeper, the domestic built Shahed 129 is claimed to be able to carry weapons making it a real UCAV (Unmanned Combat Aerial Vehicle), even if the first images surfaced so far don’t show any underwing pylon nor missile/bomb.

Considered the similarities between the Shahed and the Hermes design, there are some chances that the Iranians have not only captured a U.S. stealthy drone but maybe also some Israeli or British Hermes/Watchkeeper involved in a covert mission (as claimed last year), that they were really able to reverse engineer. 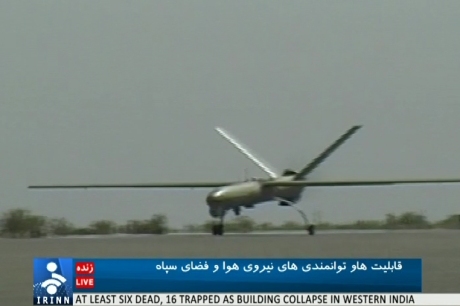 About David Cenciotti 4382 Articles
WebsiteFacebookTwitterLinkedIn instagram
David Cenciotti is a freelance journalist based in Rome, Italy. He is the Founder and Editor of “The Aviationist”, one of the world’s most famous and read military aviation blogs. Since 1996, he has written for major worldwide magazines, including Air Forces Monthly, Combat Aircraft, and many others, covering aviation, defense, war, industry, intelligence, crime and cyberwar. He has reported from the U.S., Europe, Australia and Syria, and flown several combat planes with different air forces. He is a former 2nd Lt. of the Italian Air Force, a private pilot and a graduate in Computer Engineering. He has written four books.