The U.S. Air Force has suffered its second F-22 Raptor crash of 2012 on Nov. 15, when a pilot had to eject from his jet near Tyndall Air Forcer Base Florida.

According to an unnamed Air Force official who talked with ABC News “The pilot is in good shape and has been speaking with investigators about the crash.”

The source went on to add “Initial indications are, from talking to the pilot and from analyzing initial evidence..[that] it doesn’t look like it was related to any physiological problems.”

So it would seem that the Air Force, that announce the crash on its website, was quick to distance the event from the ongoing oxygen supply problems that has dogged the jet in recent times. A full investigation will now take place to see what happened to the $150 million jet.

What is known at the time of writing is that the stealthy fighter jet, flying with the 43rd Fighter Squadron, experienced an unknown failure as the aircraft was returning to its homebase at the end of a routine training flight.

After making sure the plane would not hit any populated area the pilot ejected from the doomed Raptor, and was rescued a couple of minutes later, as the first firefighters arrived on scene.

EOD (Explosive Ordnance Disposal) team were detached to the take care of any explosive material and to look for composite fiber part which can create health concerns when burnt. For this reason, people in the surroundings were warned to stay inside while responders had to wear protective gear. 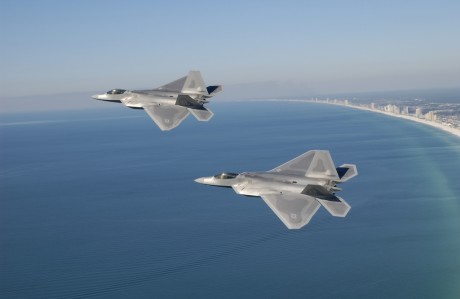 Incidentally, the report was issued on the same day the Air Force released an accident report about another mishap involving a Raptor at Tyndall AFB. On May 31, a pilot in training (also belonging to the 43rd FS), performing a touch-and-go did not advance the throttle to “military power” (full dry thrust) and prematurely retracted the landing gear causing the radar-evading plane to skid along the ground for a total damage worth 35 million USD.

Hence a pilot error, caused by the lack of experience with the troubled fighter jet.

Restrictions were imposed to the F-22 following the concern of two pilots who talked on the CBS program “60 minutes” as they were uncomfortable flying the stealthy plane (but later ready to return to fly). Although the aircraft was deployed to Japan and the Persian Gulf, flight restriction on the Raptor (grounded for several months last year) still remain in place.

Capt. Aimee “Rebel” Fiedler takes us through the various maneuvers of the F-16 display during the Wings Over Houston Airshow. As the 2022 air show season draws to a close, our friend Erick Johnston strikes […]

Check Out This Photo Of A U.S. AC-130J Ghostrider Gunship Refueling At Night In The Persian Gulf Area