Being the base of the Red Flag, Nellis Air Force Base, near Las Vegas, is used to host U.S. and foreign combat planes quite frequently.

However, the Air Force One is a quite rare sight at Nellis too.

The following picture depicts the Air Force One landing there on Aug. 21, 2012. President Obama went to Las Vegas to  discuss education and spending with members of the local community. 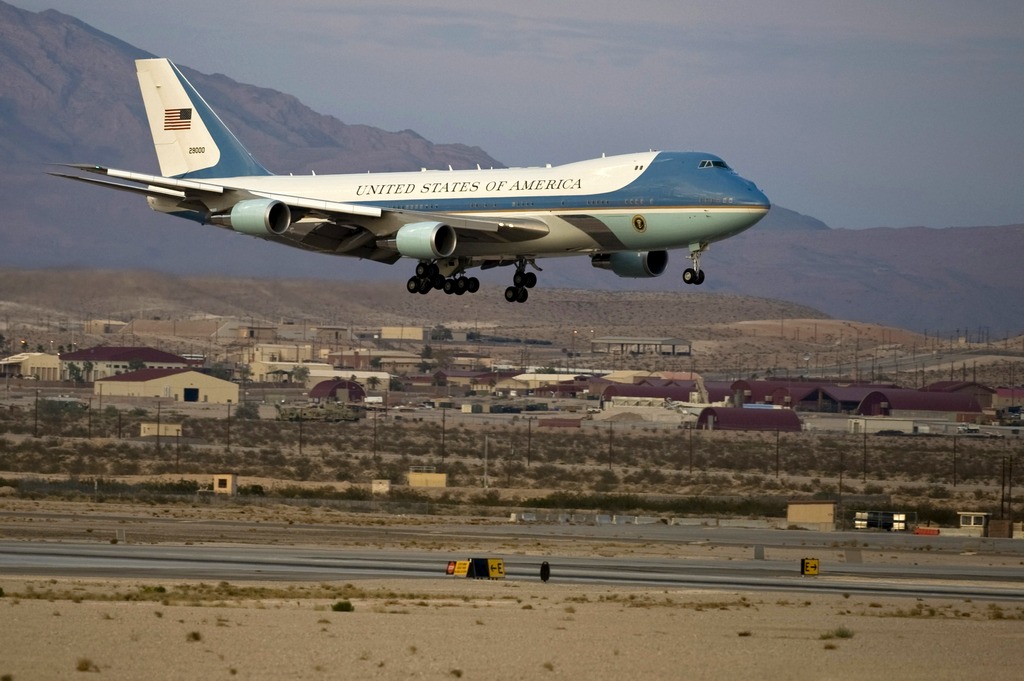 The Air Force One is a highly modified Boeing 747 designated VC-25 by the U.S. Air Force. Most probably, the two examples of the plane are the most heavily defended aircraft in the world.

Although much of the self-protection suite is classified the aircraft is known to be fitted with active electronic counter measures, that are able to jam enemy radar frequencies as well as IRCM (Infrared Counter Measure) systems needed to divert heat seeking Infra Red missiles by disturbing their guidance systems.

The one in use on the AF1 is the AN/ALQ-204 Matador produced by the BAe Systems. Such system protect the plane from both IR air-to-air and ground-to-air (MANPADS – Man Portable Air Defense Systems) missiles.

The plane is also equipped with chaff and flares dispensers: the first type is used to divert radar-guided missiles, while the flares are high-temperature heat sources ejected from the aircraft’s dispensers to mislead the missile’s heat-seeking targeting system: since the burn temperature is hotter than that at the engine’s exhaust the burning flares attract and deceive heat-seeking missiles fired at the aircraft.

Chaffs are similar: they are small pieces of aluminium (or any other glass fiber) that generate a radar return (or multiple returns) thus hiding the aircraft from the enemy launching platform and missile radars.

Last year, I published a series of articles about the 9-11 for the 10th anniversary of the terrorist attacks, that you can find here. One of them was about the Air Force One and its journey […]

“Wraith” or “Fury”? The first round of polls is already online on FB for the name to be given to the new 64th Aggressor Squadron’s F-16. As many of our readers will probably remember, last […]