Friday Jul. 13 saw the London Olympics only two weeks away.

But the date is a milestone because, at 23.00 local time, the airspace over the southeastern UK eventually came under special security restrictions tested during the previous months.

Monday Jul. 9 saw an undisclosed number of Typhoon fighter jets forward deploy to RAF Northolt (under operation code named Olympic Guardian) which is situated only a few miles from the Olympic venue in North West London.

As the week progressed, a large military machine started to move with HMS Ocean sailing up the Thames and anchoring at Greenwich, with Rapier SAM missiles also deployed at sites around the capital.  Some of these sites have been controversial as they have been set up on roofs of apartment buildings and many locals have protested at the missiles proximity to their homes.

As of Jul. 13 at 23.00 the Civil Aviation Authority that is responsible for the airspace over the UK with its National Air Traffic Control centre at Swanwick, has relinquished control of a large area  over London and the surroundings to a specially set up organisation manned by RAF personnel. “Atlas Control” will manage all aerial movements over the capital from July 13 to August 15, 2012.

The airspace block will be split in two, with “Atlas North” controlling the northern half and “Atlas South” the southern, both operating on differing radio frequencies. 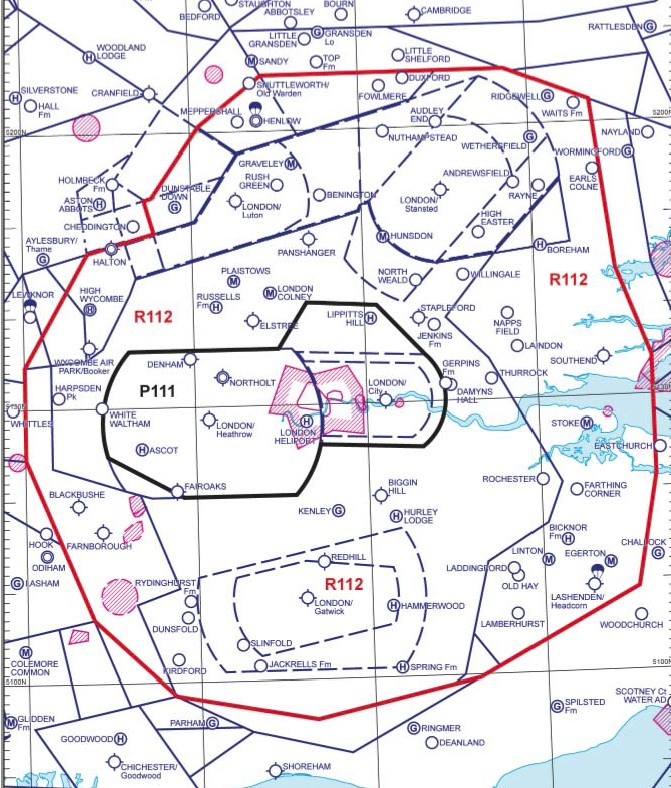 The airspace under restrictions will have an outer area called R112 this is an Restricted Zone where flying is possible under certain conditions.

All aircraft have to log a flight plan with “Atlas Control” at least 2 hours prior to the flight although there are specific conditions for each type of aircraft.

Hot Air Balloons or Gas balloons not including airships have to inform “Atlas Control” to seek approval giving details of who will be flying the balloon and their mobile phone number. They will have to give the balloons registration number, its general description and the intended launch position; the balloon will also need to squawk 6600 if able to do so.

Foot Launched Gliders such as Hang Glider and Para Gliders again have to seek approval at least 1 hour prior to launch, they will have to state the intended launch location and time of launch and will not be permitted to fly further than 3 nautical miles from the point of launch.

Unpowered Gliders including Self Sustaining Gliders can only launch from British Gliding association, RAF Gliding or Soaring Association sites. They will also have to do all of the above tasks prior to launch and again stay within 3 nautical miles of the lunch site.

All other non transponder aircraft will have the restrictions above and again will have to remain within 3 nautical miles of the airfield.

Flights into and out of London Gatwick and Standsted and many other commercial airports are exempt as long as they are under control from ATC from those locations; other exemptions are Metropolitan Police, HEMS (Air Ambulance), The Olympic Broadcasting Service (Airships and Blimps and Helicopters filming Olympic events), specific aircraft operating in support of national Infrastructure, Aircraft operated by the Ministry of Defence in support of the Olympics. 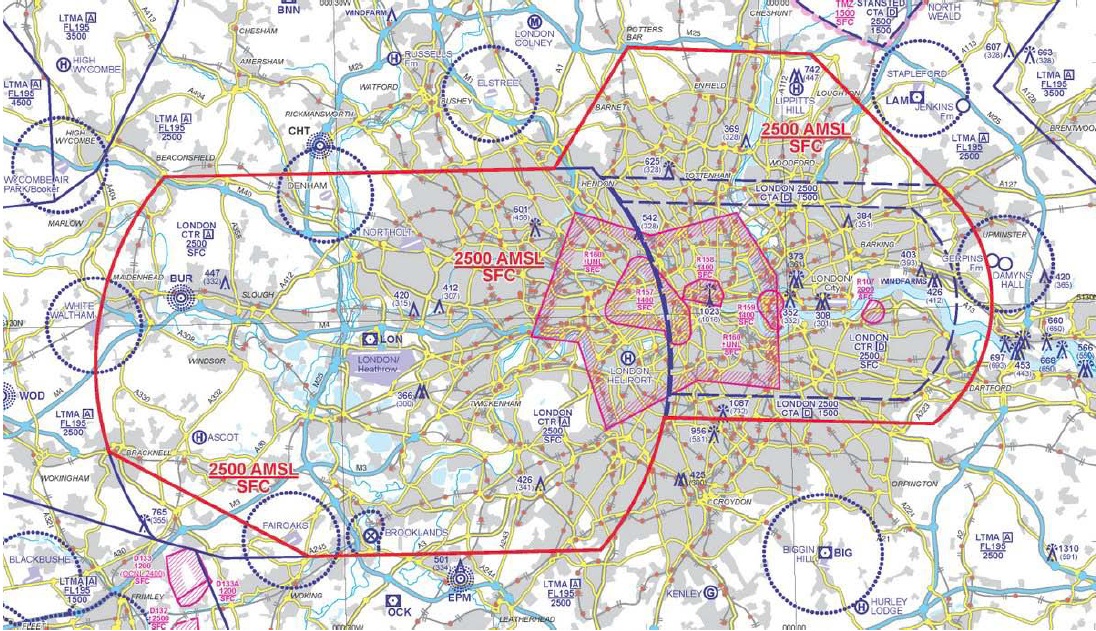 In addition to this outer zone there is an inner Zone called P111 which covers the Olympic site and inner London all aircraft will be prohibited from entering this zone other than Metropolitan Police , HEMS, Olympic Broadcasting Service, certain aircraft in support of National Infrastructure. Aircraft making an approach to or departing from London City Airport, London Heathrow Airport or RAF Northolt are exempt as long as they are under the control of the London Terminal Control Centre at Swanwick or RAF Northolt Approach and the aircraft operator has complied with certain security conditions.

Military aircraft will be operating from this inner zone with the Typhoons from RAF Northolt and helicopters from Greenwich (HMS Ocean) and Ilford, whom will be making intercepts should the need arise.

All pilots have to be in constant communication with “Atlas Control”. Even those that are within 10 nautical miles of the outer boundary are expected to keep an ear on the Atlas frequency at all times.

The CAA have released details of what will happen should the above not be adhered to.

If “Atlas Control” controllers see an aircraft enter either the restricted zone or prohibited zone they will try to contact the aircraft on the correct radio frequency should this fail, radio contact will be attempted on a back up frequency. CAA advise to squawk 7600 if the radio has failed. Should contact still not be made then military action will take place, the target aircraft will then be intercepted either by helicopter or Typhoon, The CAA has released details on what is expected of a pilot should they find themselves intercepted.

The helicopter will be armed with a sniper who will have several weapons at his/her disposal, this would be as a last resort.

The decision then will be taken as to shoot down the target. 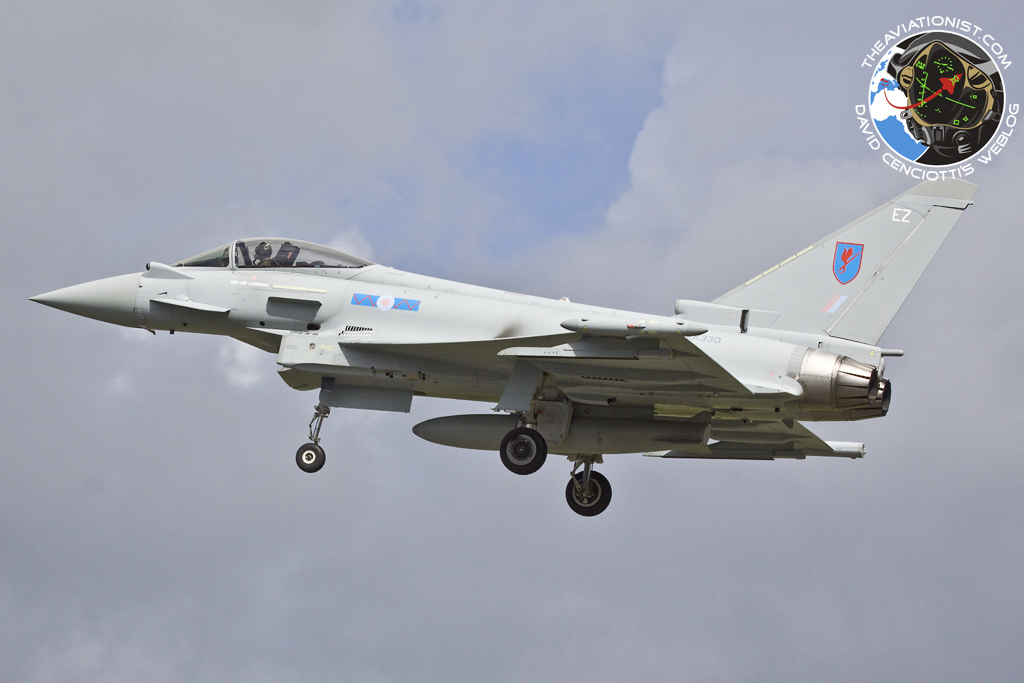 Can you spot the second plane flying fast at very low altitude through the valleys?