Even though nobody knows if an attack on Iranian nuclear program will ever be launched by the Israeli Air Force almost all analysts concur that, whathever its size, the strike force will be made of a certain amount of F-15Is, the Israeli version of the U.S. F-15E Strike Eagle.

Like all the other assets involved in the extremely difficult strike, the IAF F-15s would face serious fuel problems on such a long journey, requiring the support of several tankers; a tanker force whose presence has become paramount for the successful outcome of modern air campaigns (as shown by the Libya Air War).

Above images by Alessandro Borsetti

As the American Strike Eagles, the Israeli F-15Is can be refueled by tankers equipped with a flying boom, using a boom receptacle embedded in the left wing root.

This means that, on the way to their targets, they will have to be refueled several times by either Israeli B-707s or American tankers (U.S. KC-135 and KC-10).

Although the IAF is believed to have 8 B707 still airworthy, someone believes that other planes were reconfigured to serve as tankers in case of a strike. But, at the refueling altitudes this kind of aircraft operates (much lower than the 50,000 feet someone affirmed!), they would be vulnerable to air defenses and, above all, visibile from many miles away announcing the incoming strike with a certain advance.

That’s why the possibility that the F-15I would not only by used as bombers but also as buddy tankers (e.g. to refuel other F-15s in a similar way Tornados or Super Hornets do) is quite likely, even if it would imply the use of an IFR (In-Flight Refueling) probe to be used to take fuel from a hose and drogue system in place of the boom/receptacle system.

In the past, the Israeli Air Force modified its F-4s with a cheap probe much easy to mount and quite effective. A similar kit could be also developed for the Israeli F-15I, in anticipation of a long range strike, as someone speculates. Even if the fuel transfer rate of the fixed boom is higher than the one of a hose and drogue system, and the kit would reduce the aircraft’s top speed, the use of an IFR on the F-15I could give the possibility to the Israeli planners to embed some tankers within the strike package thus reducing the “attack footprint”.

According to a CSIS (Center for Strategic and International Studies) document issued in 2009, studies have already taken place regarding buddy refueling between F-15Es that can be packaged in  an external tank or CFT (Conformal Fuel Tanks). I’ve not found anything to confirm this report, but a similar system has been developed for the UAE AF F-16.

However, if Israel has developed such kit it’s quite unlikely that we will be able to see it: it would be the proof that they are about to launch a deep strike. 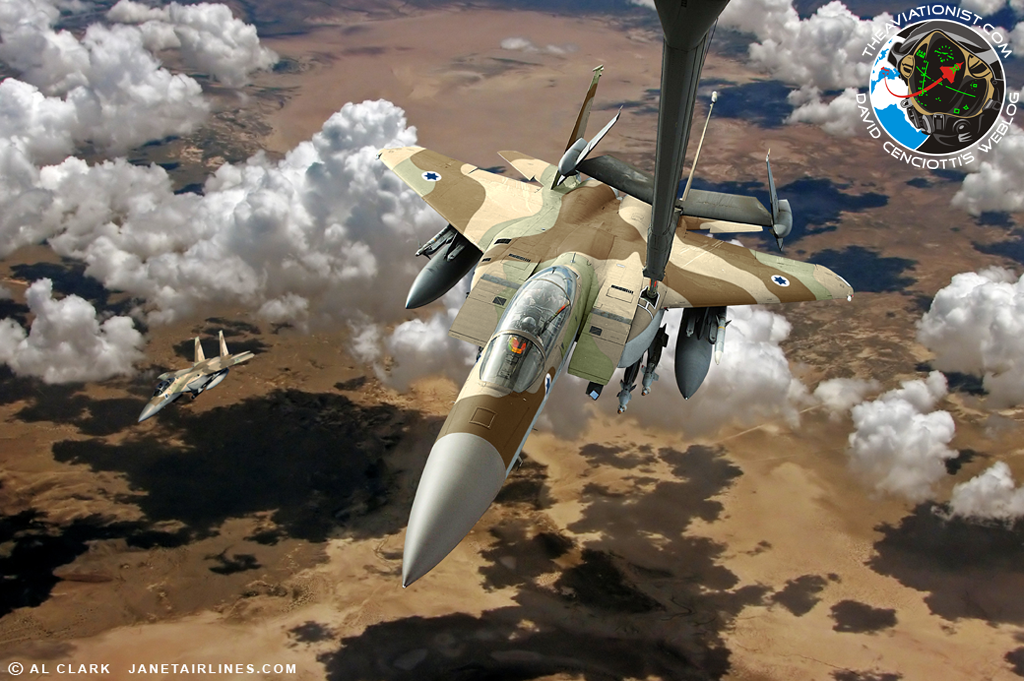 In the above rendering by Al Clark, an Israeli F-15I refuels from a US KC-10 over the desert on its way to the target. Al Clark has also drawn a fictional, scene involving an F-117. If you want to see it click here.

Israel Tested An Airborne Laser To Shoot Down Drones

The Israeli airborne laser prototype achieved a 100% success rate against target drones over the sea at different altitudes and ranges above one kilometer. The Israeli Ministry of Defense announced on June 21, 2021 that […]