Latest update: on Aug. 3, at 10.40LT, a missile exploded 2 km from the Italian frigate Bersagliere, that was patrolling the sea some 15 miles off Libya. According to the Italian MoD, it could be either a missile launched from the coast towards the ship or, more likely, a ballistic fired SAM missile that fell into the sea after missing any target. In both cases, the episode shows that Gaddafi forces still have weaponry to threaten NATO units.

More than one month has passed since my last Debrief on Unified Protector. I’ve already posted a couple of Libya-related articles since then, but here’s a quick recap of the most interesting things.

On Jul. 28, Abdel Fattah Younes, the rebel military chief who had defected from Gaddafi’s inner circle to the opposition, joining the “revolution” on Feb. 22, was shot dead in mysterious circumstances.

Rebel sources said that Younes had been recalled from the front line and placed under arrest to face questioning in Benghazi on suspicious that his family had contacts with the regime (even if there were also rumors that he was suspected of having held secret talks with Gaddafi’s government).  However, he never made it to the meeting and his body and those of two of his officers were found on the outskirts of Benghazi: they had been shot and their bodies burnt.

Younes, who had been a close associate of Gaddafi for more than 40 years after playing an active role in the 1969 coup that brought the raìs to the power, had clearly emerged as the rebel military chief, in spite of his close links to Gaddafi, in April, when he had also criticized NATO for being too slow against loyal forces and for attacking a rebel tank column near the eastern town of Brega where five people died and 14 were wounded.

Although, what really happened is still not clear, rebels have said that Gen. Younes was shot dead by militiamen allied in their war, raising questions about divisions and lawlessness within anti-Gaddafi ranks. 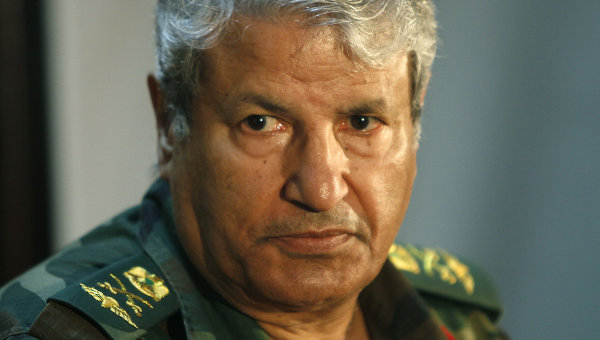 On the battlefield, fighting is still taking place close to the coastal town of Zlintan, in the Western Mountains, where rebels seized the town of Ghazaia . In the east, rebel forces fought loyalist in clashes against gunmen loyal to Gaddafi and agents who have infiltrated the rebel-held area.

Misratah is now enjoying relative security even if NATO has reported occasional shelling by pro-Gaddafi forces operating out of Tawurga, which is south of the town.

The shelling has focused on the port facilities and the airport, as well as the LISCO fuel storage facility.

The following Reuters map gives an idea of the fighting around Tripoli. 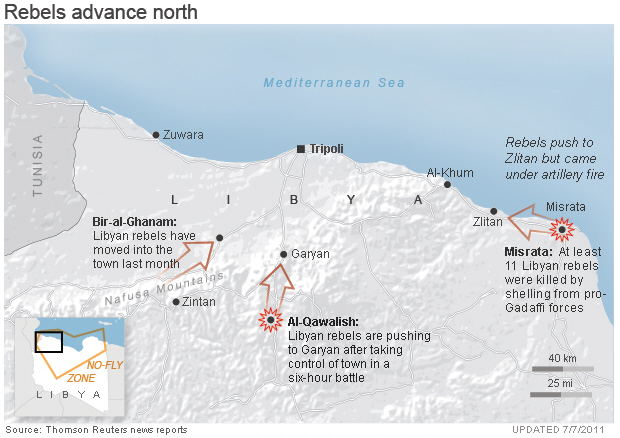 In the meanwhile, NATO air campaign continues with improving concerns of partner sides, some of which have already reduced, if not withdrawn, their contingents. For instance, the Charles De Gaulle and Garibaldi aircraft carriers returned home and, on Aug. 1, the RNoAF has in fact completed its mission. The problem is the sustainibility of an air campaign whose length is still unclear.

In the last few days, the air strike on three critical satellite dishes of the Libyan State TV made the news. According to NATO, the attack was aimed at reducing the regime’s ability to broadcast messages inciting attack on civilians. However, the Libyan State TV continued to broadcast and condemned the air strike saying that it caused three employees were killed and 15 were wounded.

Not only the Libyan TV has been attacked, but also the Tripoli airport’s radar that was used by Gaddafi forces to get early warning of allied air strikes.

We have entered the period of Ramadan and NATO has declared it will continue its air strike, as Colonel Roland Lavoie Operation, ‘’Unified Protector’’ military spokesperson, said.

NATO and partnering nations have a profound and sincere respect for Muslims and their faith. As we enter the holy month of Ramadan we are all reminded that we share a common respect for human life.

Other interesting information, things and thoughts:

1) As said, since Aug. 1, Norway has withdrawn its F-16s from Unified Protector. The decision has nothing to do with the Oslo and Utøya attacks, as it was taken on Jun. 10. RNoAF flew 596 missions with 6 F-16s deployed to Souda Bay. 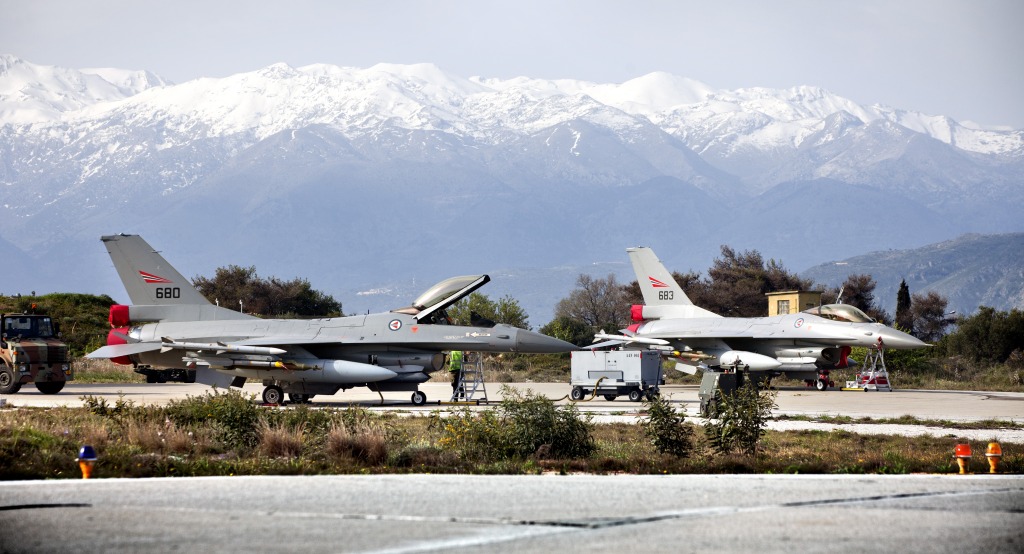 2) Since Jul. 10, French Rafales were moved from Solenzara to Sigonella. Official explaination is that they are nearer to Libya, hence they can reduce transit time to the operative area. According to speculation the move was made to operate the French fighters next to the UAE contingent (flying from Sigonella with the F-16 and Mirage 2000), since UAE could be interested in the Rafale. Mirage 2000s deployed to Souda Bay returned home since they are no longer needed to enforce the NFZ (due to the lack of air threats).

According to Air Vice Marshal Greg Bagwell, who spoke at the RIAT at RAF Fairford in mid July, the RAF contingent has performed 15% of all allied air strikes. However, he underlined that the 90% of RAF strike missions have been conducted against targets of opportunity, often located in urban areas, while other partners, like Italy and UAE have flown 100% of their attack sorties against pre-planned/fixed targets. Dealing with Italy, the decision to attack only fixed targets away from populated areas was taken at political level to prevent collateral damages.

4) After reporting many fuel diversions to Malta International Airport by the French fighters of all types (Rafale, Mirage 2000, Super Etendard, Mirage F1), during the last month, Luqa airfield was visited twice by RAF Tornados (one of which had to perform an emergency landing for a hydraulic failure) and once by a Danish F-16 on Jul. 29.

5) On Jul. 29 the Associated Press that on Jun. 29 published an article that disclosed that the Canadian CP-140 Aurora, a multi-purpose plane mostly used as an anti-submarine warfare platform has been employed, in combat, to perform PSYOPS: Interactive PSYOPS in Libya: the Canadian live benign propaganda messages prompt the listener to reply to the broadcaster.

6) Picture of two Mig-21bis and one double seat Mig-21UM flying over Benina airbase clearly showed a violation of the No-Fly Zone (NFZ) over Libya. In fact, the UNSCR established a ban on all flights in the airspace of the Libyan Arab Jamahiriya, rebel ones comprised.

Many fighters are still enforcing the NFZ while E-3 AWACS are still patrolling the Libyan airspace so, unless common procedures are used and prior coordination is made to establish routes, control agencies, IFF squawks, etc, flying within the NFZ could be a risk for Free Libya Air Force fighters.

However, Reuters images taken on Jul.12 show an Air Libya BAe 146 used to link Benghazi with Rhebat, in the Nafusa region, a new airfield opened in the remote Western Mountain region.

Since it is impossible to operate those flights without NATO’s approval, these photos explain the reason why the Mig-21s were flying over Benina on Jun. 27: a limited rebel flight activity must have been granted to the rebels (probably in the form of a transit corridor between Benina and Rhebat).

7) Misratah airport opened again on Jul. 19 with a humanitarian flight flown by an AN-26 with registration 5A-DOG. 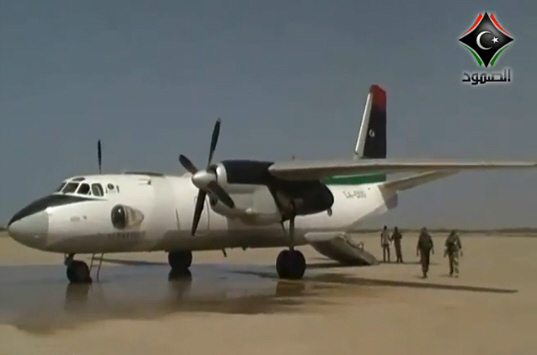 At this link, you can find a video of the Antonov 26 landing at Misratah airfield. The above screenshot was taken from that video.

8) Italy has initially withdrawn the Garibaldi, that returned to Taranto from where it managed the Italian ships involved in the Mediterranean Sea, then has deployed the AMX ACOL, a combat proven aircraft that has been operating in Afghanistan (although only for reconnaissance purposes) and has had its combat debut in 1999, in Serbia.

According to the official MoD press release, the AMXs belong to the 32° Stormo, based at Amendola. Since the same press release doesn’t mention the F-2000 Typhoons, most probably, these were replaced by the AMXs due to the total lack of air threats in the NFZ (as France did with its Mirages).

The Sole 24 ore financial newspaper published on Aug. 2 some previously unreleased figures about the Italian involvement in Unified Protector: with 1.700 sorties conducted to the date, Italy has flown the 10% of all the combat sorties in Libya, with an effort that is second only to UK and France.

9) With the AMX taking part to the air campaign, a new patch was designed by the air crews at Trapani, home of the Task Group Air, that includes all the ItAF assets assigned to Unified Protector. That’s actually a limited edition patch sold by the 18° Gruppo to raise funds for a Hospital in Africa. For more information, send an email to this address. 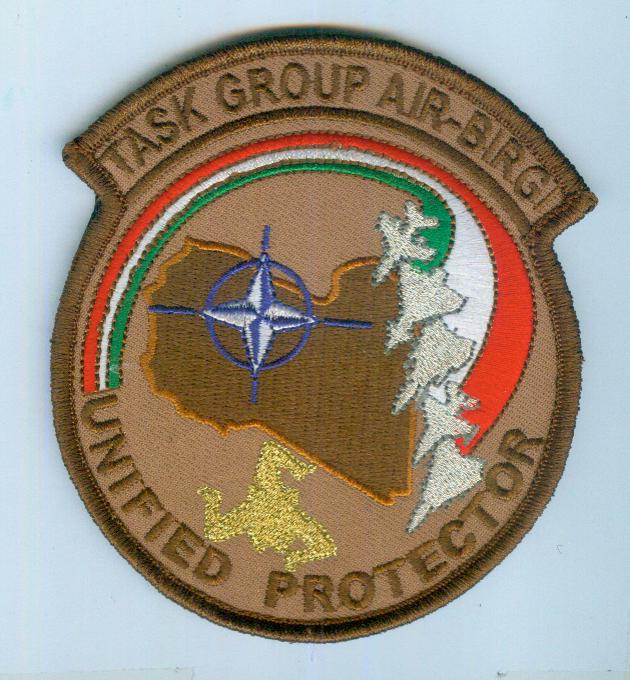 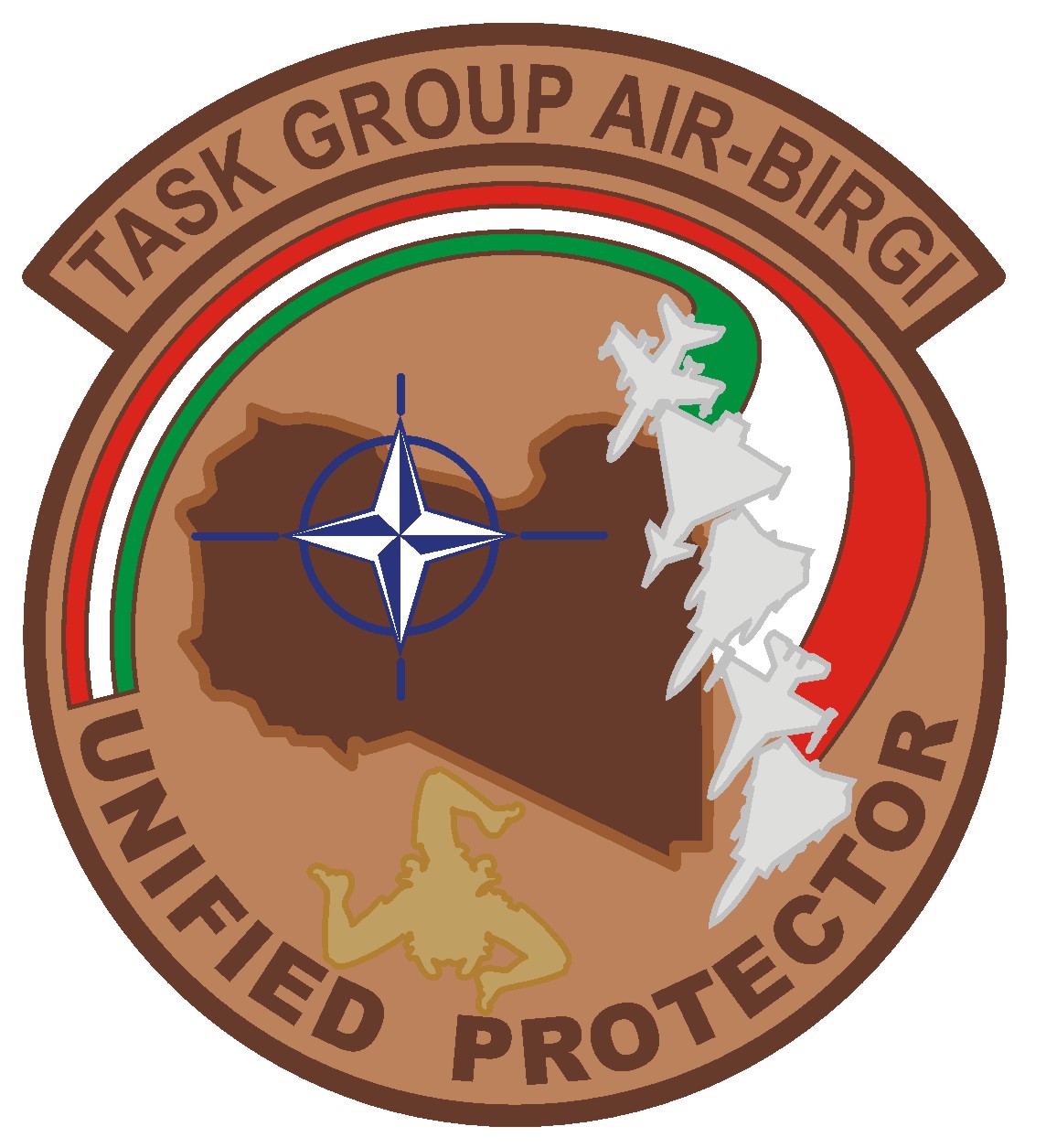 10) The Malta LiveATC.net feed was shut off towards the end of June. Officially, it was a computer problem, however, since the LMML airport was immediately removed from the list of airfields covered by the service, there are rumours that the local feeder was asked to cease “relaying” Malta ACC and TWR comms to the rest of the world using the web. OPSEC or INFOSEC concern?

NATO Tiger Meet 2019 was attended by several special-colored aircraft. Here are some of those we have shot during the Spotter Day. NATO Tiger Meet (NTM) does not need introductions. Most (if not all) of […]

NATO’s build-up continues following the invasion of Ukraine, with multiple fighter jets relocating and reinforcements arriving on the Eastern flank. As we reported in the last 24 hours, following the Russian invasion in Ukraine, NATO […]