The following screenshot is taken from a video released by the Israel Defense Forces (IDF) and shows a man (belonging to a rocket launching group) about to be shot in his face by a “Tamuz”, a previously classified missile used in the Second Lebanon War and during Operation Cast Lead in Gaza. 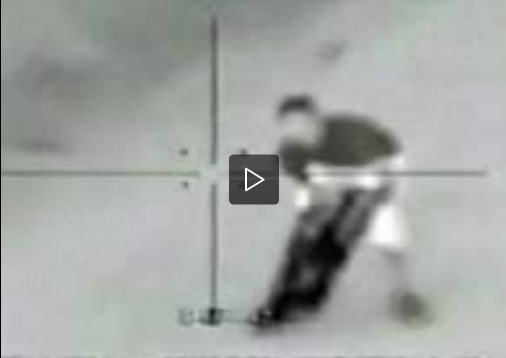 The Tamuz missile has a range of up to 25 kilometers, can penetrate armored vehicles and is equipped with an electro-optic sensor that allows its ground operators to change its course by watching the target through the missile’s camera.

This kind of weapon was developed as an anti-tank missile then, when the kind of threat faced by the IDF changed in nature, it was made more suitable for strikes againsts smaller targets. It was fitted with a new warhead with reduced explosive material and used against Hezbollah in sothern Lebanon and against Qassam squads in the Gaza Strip.

Tamuz missiles can be directed using information provided by a wide array of “sensors”, including helicopters, planes and UAS (Unmanned Aerial Systems), like the Elbit Hermes 450 and Skyraider (a mini-UAV), used by the artilley corps.

The following video gives an idea of how the Tamuz missile seems to operate when it is fired towards a target: it initially climbs to an altitude that give its camera a good point of view of the presumed target area; then it moves (slowly) towards the target area (it seems to hover) and, as soon as a positive identification is obtained, it is guided to hit the target (in this case a building from where a rocket was launched).

Image definition is high and speed slow enough that, as the above video and screenshot show, the Tamuz operator can decide to aim at a single man and literally “look the enemy in the eye”….

According to an article published by the Jerusalem Post on May 13, the Israeli Defense minister Ehud Barak and U.S. counterpart Leon Panetta will announce (in a press conference to be held after meeting scheduled […]

Aerial Reconfigurable Embedded System will perform cargo resupply, CASEVAC and ISR missions According to Darpa “ARES is a vertical takeoff and landing (VTOL) flight module designed to operate as an unmanned platform capable of transporting […]