Rich static display and modest dynamic program for an airshow with many interesting “themes”.

Last weekend we attended the ILA Air Show held at the Berlin Schönefeld airport. The event, one of the largest aerospace trade exhibitions held in Germany, was organized by the German Aerospace Industries Association (BDLI) and Messe Berlin GmbH.

Volker Thum, Chief Executive of the BDLI, reported outstanding results: “This ILA was the ’best ILA ever‘. We have continued to develop the world’s oldest aviation and space exhibition with conspicuous success, making it our industry’s leading trade show for innovation.”

The dynamic displays in Germany are somewhat limited by the strict regulations pertaining to, i.e. the minimum altitudes and display envelope limits, which partially resulted from the Frecce Tricolori crash at the Ramstein Air Base, back in 1988. Therefore, ILA is not really a place where you go to admire the dynamic displays in their full glory. However, the static display in Berlin was one of the most impressive one could ever witness.

The Antonov An-225 Mriya was definitely one of the show’s highlights. The Antonov Design Bureau decided to send the giant aircraft to Berlin, and it was displayed on the static. Compared to any other airframe, the Mriya is simply enormous. Even the A380 which is the largest commercial airliner in existence looked small, compared to the Ukrainian airlifter.

Antonov’s presence at ILA stemmed from the fact that the company decided to declare its willingness to increase its involvement in the NATO SALIS (Strategic Airlift International Solution) program. It was in April this year when Volga-Dnepr airlines, the only (alongside Antonov) operator of the An-124 heavy airlifters, resigned from its involvement in the program. The Russians will cease rendering of the services for NATO as of Jan. 2019, reportedly due to restructuring; however it is also very plausible that decisions made are a response to the increased pressure caused by the sanctions imposed on Russia by the West. Antonov declared, during the ILA event, that it could increase its SALIS engagement to replace the Russian operator with its fleet of An-124, An-22 and An-225 aircraft (only a single example of the latter one exists).

The static display also featured Airbus Beluga, placed alongside the Airbus’s largest passenger aircraft, the A380. The particular airliner displayed in Berlin was the 100th airframe delivered to the Emirates airline. Even though Beluga is not larger than the A380, its appearance and size are definitely a sight to behold.

Another prevalent theme that somehow influenced the Berlin exhibition is the German Tornado strike aircraft replacement. The static display was rich in modern fighter aircraft. The Germans are looking to replace their Tornados, in strike and electronic warfare variants (IDS and ECR respectively). Luftwaffe currently operates 90 of these jets, and the replacement process is to begin in 2025. Alongside Germany, Finland (H-X program) and Poland (Harpia program) are also looking forward to modernize their air forces.

Germany and France are also working on a joint next generation fighter program – FCAS – with the jet expected to be introduced into service in 2040. The program involves Airbus and Dassault. Notably, both companies are currently offering advanced 4th generation designs: Eurofighter and Rafale. However, given the scope of technological development and industrial effort required to create the 5th generation jet, the project’s joint nature is a natural way to go. Also, considering the timeline for introducing the new aircraft, some intermediary measure would be required to fill in the capability gap that would occur, once the Tornadoes are withdrawn. This is the main reason why the Germans are still considering procurement of 4+ or 5th generation fighters in the meantime.

Airbus, during the ILA event, declared that the company is ready to make the Typhoon nuclear capable. Nonetheless, some voices suggest that instead of acquiring more Eurofighters, the Germans could make some steps towards purchasing the fifth generation F-35 aircraft. The static display also featured F-15 Eagle and F/A-18F Super Hornet. To meet the Luftwaffe’s electronic warfare requirement, Boeing could also offer its EA-18G Growler jet. One should note that Luftwaffe is expressly claiming that the F-35 would be the best fit for the replacement program. Two such aircraft were displayed in the static area. It should also be noted that an F-35/Typhoon combo has also already been selected by some nations as the way to go, including the RAF or the Italian Aeronautica Militare. It is evident that the jets are complementary, with the F-35 acting primarily as the sensor and situational awareness asset (using its stealth and net-centric properties), while the Typhoon may be acting as the missile carrier, adding to the performance of the missiles. Given the Typhoon’s thrust-to-weight ratio, and integration with the Meteor BVR AAM, the jet is a perfect platform that enhances the kinetic performance of the already very capable air-to-air effector.

All of the aforesaid aircraft were displayed within the static area. Unfortunately, and disappointingly, the F-35 was not flying during the German show, despite its expected and rumored presence in the air. Notably, the F-35, while flying to make it debut in Germany also made the longest nonstop flight – 11 hours and 10 aerial refueling operations.

Tornados and Eurofighters were flying during ILA. Moreover, “Ghost Tiger” livery Typhoon had its premiere during the show in Berlin, with a quite impressive dynamic display. The very same jet will be displayed during the NATO Tiger Meet happening in Poznan this month (needless to say, we will be attending this event as well).

The Germans are also looking forward to replace their CH-53G heavy lift helicopters. The proposed replacements include the CH-53K King Stallion that made its debut during the ILA Show. However, on Saturday, when we attended the event, neither could it be seen flying, nor was it present in the static display area. Another proposal that Luftwaffe may look at is the CH-47 Chinook. This capable airframe was brought to Germany by the RAF and it was wearing the RAF centenary livery. Its transport capabilities and agility (impressive, given its size) were also presented during the dynamic display.

Berlin is working, in collaboration with France, on acquiring a new MPA platform. This could also have been witnessed in the static display, with Lockheed P-3, Boeing P-8 and CASA C295 MPA all showcased on the show’s ground. Kawasaki P-1 was a highlight of the German show. Not only was this jet presented on the ground, but also performed an impressive dynamic display. The Japanese design is undoubtedly a rare sight on any European air show. Roadmap for the said project is expected to be unveiled later this year.

Another highlight of the dynamic display that could not have been overlooked was the Il-2 Sturmovik aircraft brought to Berlin by the Russians. The venerable WWII fighter/bomber performed a dynamic display over the ILA 2018 grounds. Many of the people attending the show have seen the aircraft for the first time ever. It is said that only two flying examples exist. We have already seen the famous Russian airframe fly last year, during the MAKS 2017 event, when it was premiered. Vintage aircraft also included Yak-3 and CAC13 Boomerang as well – both were flying a dynamic display. We could also see a Bell 47 that flew with the MASH series soundtrack in the background. 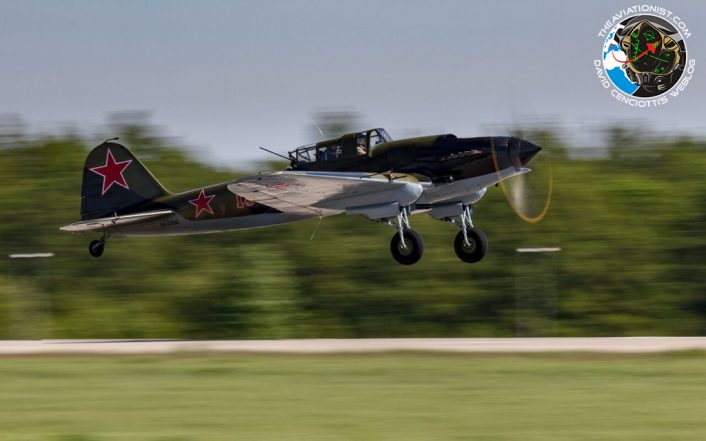 Airbus showcased its A350 airliner in the air. The Luftwaffe staged several role displays (interception/scramble, with Pilatus turboprop acting as the intruder, CSAR operation, MEDEVAC operation), as well as an air parade, featuring the German aircraft in a variety of formations and configurations, including a great number of helicopters ranging from H145 with CH-53 Stallion to finish with.

Furthermore, Red Bull also showcased its aircraft in the air, including the DC-6, silver P-38 Lightning, the T-28 Trojan with its special smoke trails (the smoke generators in case of this aircraft are mounted in the wingtips which makes the smoke swirl and form rings in the sky) and the Alpha Jet that made a joint formation flight.

Overall, the show was impressive, especially when it comes to the static display and it was a good warm-up before the proper air show season begins in May. Anyway, it is going to be very interesting to watch and follow the developments in the European fighter aircraft programs. The competition and choices expected to be made between 4+ and 5th generation aircraft will undoubtedly be tough, in case of the European nations that would be facing such a challenge: Finland, Poland and Germany.

PS We’ve also met the Sturmovik during its return trip at the Poznan International Airport, as it made a refuelling stop there! Thanks for organization of the visit go to Witold Łożyński and the Ławica airport staff!