The USMC Joint Strike Fighters based in Japan will take part in Foal Eagle joint exercise with South Korea. A rather symbolic move.

Some F-35B STOVL (Short Take Off Vertical Landing) are taking part in Exercise Foal Eagle in South Korea, according to U.S. military sources who talked to Yonhap News Agency.

The aircraft Lightning II will carry out “ground attack” tasks during the two-month drills.

“The addition of the F-35B is meant to deliver a strong message to the North that they could be used against the rogue state in case of a conflict breaking out on the Korean Peninsula,” an official said to the South Korean media outlets.

Earlier this week North Korea fired off four ballistic missiles into the seas near Japan in the latest of a long series of nuclear threats to the US, Japan and South Korea.

Although the attendance of the 5th generation stealth aircraft in the exercise can be seen as a message in response to Kim Jong Un’s growing missile threats it was first speculated as the first U.S. Marine Corps F-35B squadron was deployed to its new homebase in Japan.

In October 2016, a contingent of 12 F-35Bs took part in Developmental Test III aboard USS America followed by the Lightning Carrier “Proof of Concept” demonstration on the carrier on Nov. 19, 2016.

During the POC, the aircraft proved it can operate at-sea, employing a wide array of weapons loadouts with the newest software variant and some of the most experienced F-35B pilots said that “the platform is performing exceptionally.”

Although the F-35B is the most modern combat plane in the region and can theoretically be used as part of a larger package to hit very well defended North Korean targets in case of war, the presence of a handful stealth multirole aircraft (just 10 aircraft deployed to Japan, 6 more are reportedly joining the USMC squadron at Iwakuni by August this year), is mostly symbolic and must be considered as part of a wider military force, an armada that, if needed, would also include B-1B Lancers deployed to Guam to support the U.S. Pacific Command’s (USPACOM) Continuous Bomber Presence mission, U.S. Air Force B-52 Stratofortress and B-2 Spirit stealth bombers (that have already conducted extended deterrence missions over the Korean Peninsula in the past years); along with other USAF from land bases and U.S. Navy aircraft from aircraft carriers, including the F-16 in Wild Weasel role and the EA-18G Growlers Electronic Attack assets, to name but few. 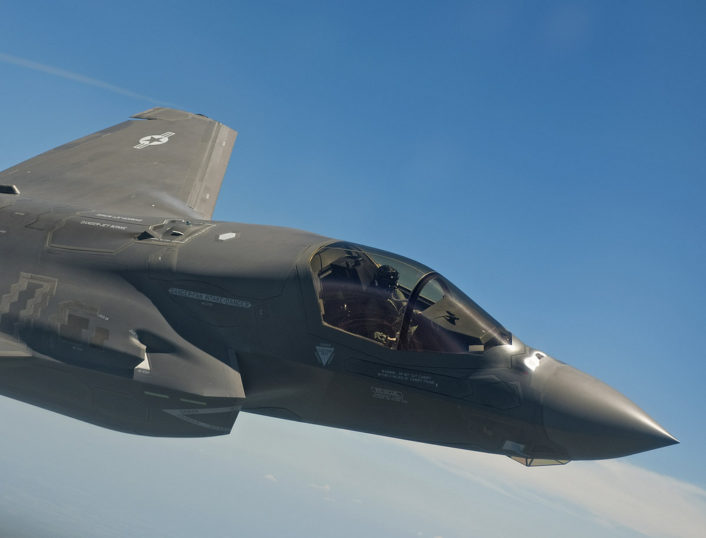 U.S. B-1 Lancer Bombers Escorted By F-15 Jets Fly East Of North Korea, North Of The DMZ: Four Reasons Why This Time It Is Interesting.

This is the farthest north of the Demilitarized Zone (DMZ) any U.S. fighter or bomber aircraft have flown off North Korea’s coast in the 21st century. On Sept. 23, hours after the latest threats from […]

A photo unveiled the presence of two Raptors close to “Shepherd One.” During Pope Francis’ visit to the United States, the U.S. government carried out one of the largest domestic protective security operations in its […]