One of the most difficult aviation evolutions made more difficult: incredible aerial refueling footage showing the extended refueling probe of the CH-53E move significantly from vibration and the boundary layer passing over it at speed…

Pilots will tell you midair refueling is a challenge. Add midair refueling a rotary wing aircraft like this U.S. Marine CH-53E Super Stallion carrying a 5,200-pound sling loaded HUMVEE vehicle while using a flexible drogue system and you have a very difficult refueling exercise.

Midair refueling with a large vehicle sling load could be a necessity for small U.S. Marine teams conducting special operations in a denied environment. This is especially important for the Marine’s own reconnaissance units, who provide tactical and strategic level intelligence in support of larger Marine operations as seen in the Gulf wars. Additionally, this type of unusual aviation operation would support the newest Marine Corps special operations asset, the Marine Special Operations Command or “MARSOC”.

Finally, a more mundane application of this type of midair refueling may simply be recovering a vehicle that broke down in normal operations.

Regardless of the reason for an operation like this, it is a difficult bit of flying. The KC-130J Hercules, assigned to Marine Aerial Refueler Transport Squadron (VMGR) 234, has a published stall speed of 100 knots (115 MPH, 185 KPH) while the top speed of the MH-53 helicopter is about 170 MPH without the sling load, and probably almost 30-40 MPH slower with the added drag of the big HUMMV hanging below the aircraft. This gives the two flight crews only about 25-40 MPH of airspeed variance between the aircraft in this configuration to work with. Add some unfavorable winds and this can be a difficult bit of flying.

When you watch the above video carefully you see a number of the risks inherent to midair refueling helicopters. Watch both the refueling basket or “drogue” oscillate in the boundary layer of air at speed and the extended refueling probe of the CH-53E also move significantly from vibration and the boundary layer passing over it at speed. In the instant prior to contact you may notice a bright spark of static electricity discharged into the refueling drogue. The charge is created by the rotation of the rotors. Finally, when the refueling drogue disconnects from the probe on the helicopter a significant mist of vaporized fuel is released. The entire inside of the MH-53E helicopter may smell like aviation fuel after the release of the drogue, making flight crews particularly concerned about any sparks igniting remaining fuel vapor.

This video certainly isn’t the first time this technique has been practiced, and Marine aviators will tell you it isn’t an unusual capability for them, just part of their mission set. Here are some even more remarkable photos taken over a year before this video of a Marine CH-53E with multiple sling-loaded vehicles, an extremely unusual mission requirement. 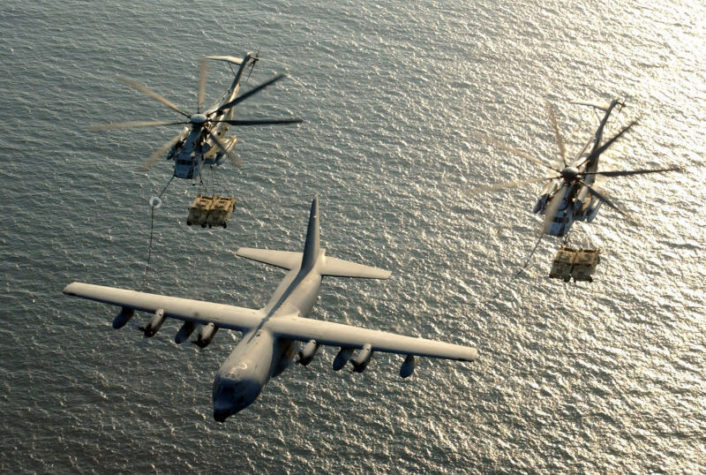 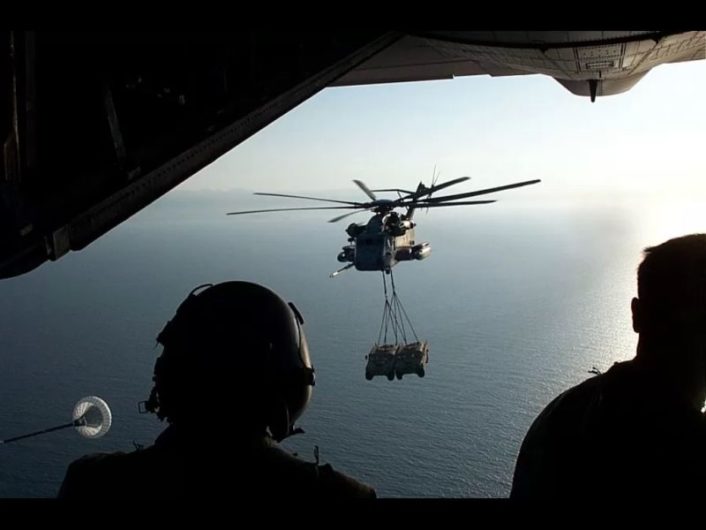 These photos and video support the Marine claims that they are among the very best and most versatile rotary wing, and fixed wing, aircrews in any air force in the world.

U.S. Air Force RC-135s teaming up with Marine Corps EA-6Bs (and others..) to detect and suppress ISIS comms

In the skies over Iraq, USAF spyplanes, USMC and USN Electronic Attack aircraft work together to deny the Islamic State the ability to communicate. The image above shows a U.S. Air Force RC-135V/W Rivet Joint, deployed […]

A KC-10 Extender has lost its flying boom. Someone’s found it in his hay-field…. A U.S. Air Force KC-10 Extender aerial refueler belonging to the 60th Air Mobility Wing was forced to perform an emergency […]

Birthplace of TOPGUN Evolves in Advance of New Threats in Pacific and Beyond. “Just as water retains no constant shape, so in warfare there are no constant conditions.” -Sun Tzu, “The Art of War”. It […]