A U.S. Marine Corps Osprey that was supporting the first known counterterrorism operation under President Trump crash-landed in Yemen. It was later destroyed by U.S. raid.

Early in the morning on Jan. 29, one American Special Operations commando was killed and three others were injured in a fierce firefight with Al Qaeda fighters targeted by a predawn raid against the AQ headquarters in Yemen.

The surprise attack was carried out by commandos from the U.S. Navy SEAL Team 6 in Bayda Province who killed 14 Qaeda militants in what is the first confirmed anti-terror operation under Trump presidency.

It’s not clear what aircraft were supporting the raid; what has been confirmed is that a U.S. Marine Corps MV-22 Osprey aircraft called in to evacuate the wounded American soldiers crash landed, injuring 2 service members (1 according to other sources).

The tilt-rotor aircraft was intentionally destroyed in place by a U.S. raid once it was determined that it could not leave the crash landing site. 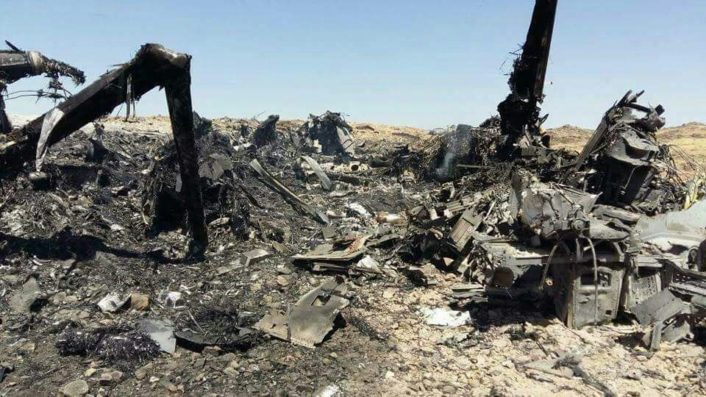 This was not the first time a U.S. helo supporting a Special Operation crash lands.

On May 2, 2011, one of the helicopters used by the U.S. Navy SEAL Team 6 in the raid that killed Osama Bin Laden crash landed near OBL’s compound at Abbottabad, Pakistan.

Military on board the helicopter escaped safely on another chopped while the downed one was destroyed leaving only few parts near the Bin Laden’s compound.

Unfortunately for them, those parts didn’t seem to belong to any known type.

In particular, the tail rotor had an unusual cover that could be anything from an armor plate to a noise reduction cover sheltering the motion-control technology used to input low-frequency variations of rotor blade pitch-angle, as tested by NASA; the blades were flatter, and not wing-shaped, whereas the paint job was extremely similar to the kind of anti-radar paint and Radar-Absorbing Material coating used by the most modern stealth fighters: nothing common to either Black Hawks, Chinooks or Apaches helicopters: that crash landed unveiled a Stealth Black Hawk (or MH-X).

Back to the Sunday raid, it’s worth noticing it was the first carried out with commandos, considered that the U.S. has typically relied on drone strikes to target AQ militants in the region (the latest of those were launched each day from Jan. 20 to 22 killing five terrorists). However, it seems this time U.S. troops seized militants laptops, smartphones and other material that was worth the rare ground assault against Al Qaeda.

The KC-130J pilot was awarded a DFC decoration, “the highest award in flying and the fourth highest award for bravery; awarded for heroism or extraordinary achievement while participating in aerial flight.” On Sept. 29, 2020, […]

We Visit VMFA-211, The Famous “Wake Island Defenders”, To Learn Their History.

First U.S. Unit To Use F-35 In Combat Continues Legacy of Famous WWII Squadron. This past week I had the privilege of spending time with the men of Marine Fighter Attack Squadron 211 (VMFA-211), the […]