RAF Typhoons flew near Admiral Kuznetsov aircraft carrier sailing through the English Channel on the way home after taking part in the Syria air war. Just a “useless” show of force?

A British warship, Royal Navy frigate HMS St Albans, along with 3 RAF Typhoons have shadowed the Admiral Kuznetsov aircraft carrier and its battle group as they passed by the UK on Jan. 24.

The Russian carrier and her battle group (the Pyotr Velikiy, a nuclear-powered Kirov-class battlecruiser and a salvage tug) are returning home after completing their first combat deployment to the eastern Mediterranean to take part in the air war in Syria, a cruise that was plagued by two crashes (a MiG-29K and a Su-33). 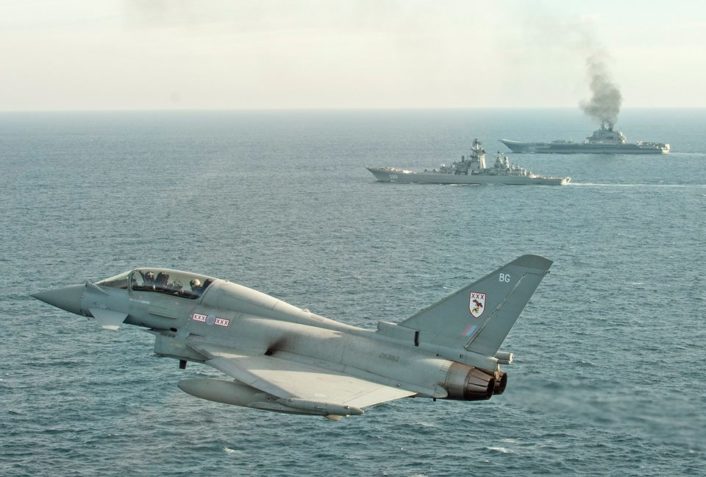 The three Eurofighters, two single-seaters and a two-seater (along with a photo-ship, perhaps another Typhoon) flew near the Admiral Kuznetsov in what was just a show of force: the British multirole aircraft have no real anti-ship capability nor carried any armament.

Based on the photographs, only one Typhoon FGR4 ZJ927 had at least one (dummy) ASRAAM (Advanced Short-Range Air-to-Air Missile) on the outer port pylon. 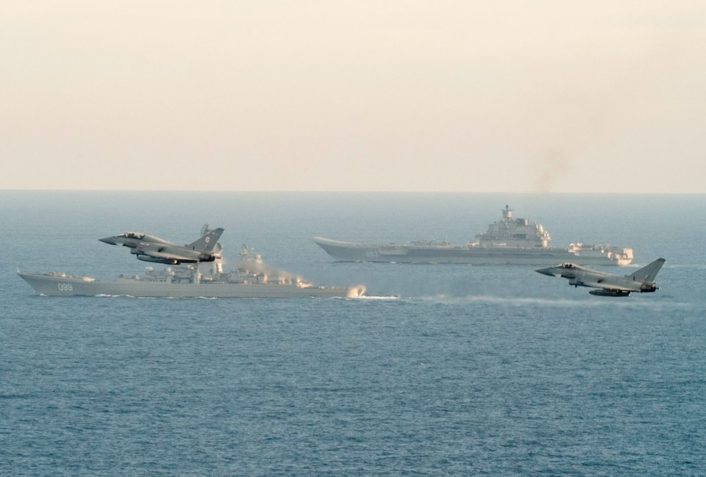 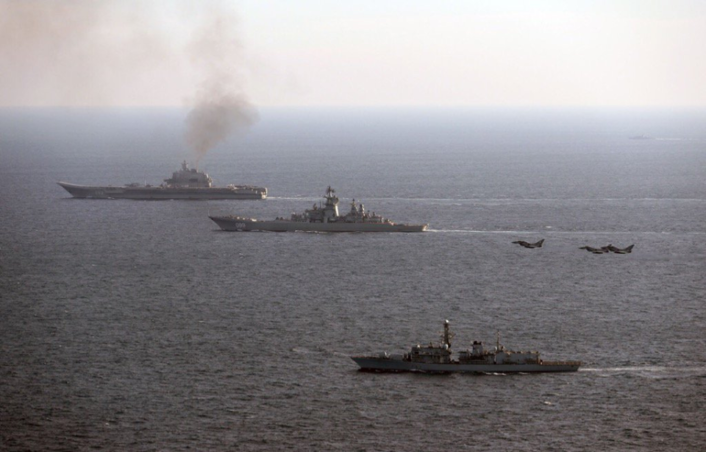 Here’s an interesting clip filmed by the RAF jets during their flying activity in the vicinity of the Russian carrier.

Russia’s MoD claimed the British performed a useless escort. Here’s Russian Defence Ministry comment  on the statement of the British Secretary of State for Defence Michael Fallon concerning the escort of the Russian carrier group by the British ships off the coast of Great Britain:

“We have paid attention to the statement of the British Secretary of State for Defence Michael Fallon concerning the Russian carrier group which is passing the English Channel on its way home after combat task performance.

The goal of such statements and show concerning the escort of the Russian ships is to draw the attention of the British taxpayers away from the real state of affairs in the British Navy.

First, the Russian combat ships do not need escort services; they know the fairway and the course.

Second, Mr. Fallon is recommended paying more attention to the British fleet all the more there is every reason for it according to the same British press.“

The Russian MoD also highlighted that the British newspaper Sunday Times reported about a failed launch of a ballistic missile from submarines of the British Navy recently.

According to a Royal Navy spokesperson “Remaining at a respectful distance, but keeping the Russian warships clearly visible, Royal Navy sailors keep watch on every movement through their binoculars and use state-of-the-art radars to track the course and speed of the ships as they pass close to the UK.”

BBC defence correspondent Jonathan Beale says Typhoons may have used their sensors to try to detect the Russian’s air defence systems but the Eurofighter ESM (Electronic Support Measures) capabilities are quite limited if compared to other specialized aircraft (including the RAF E-3D or the Sentinel R1, whose presence in the same “surveillance operation” can’t be ruled out) that could gather much more significant data (if any, considered that the Russian aircraft carrier has been closely monitored while operating in the Med Sea with all its systems turned on….) from (safe) distance.

The sinking of the decommissioned USS Boone saw in action, for the first time, many offensive capabilities, like the Quicksink bomb and the SM-6 missile in the anti-ship role. On September 7, 2022, a SINKEX […]