The photographs in this post were taken by our contributor Alessandro Caglieri at Decimomannu airbase, Italy.

They show a German Air Force C-160D Transall about to land on runway 17 at “Deci” during one of the flights conducted to the Italian airbase in Sardinia before the German Detachment was eventually closed after 56 years.

The aircraft appears to be one of the 24 C-160s modified with the EloKa self-defense system to enhance the airlifter’s self-protection capabilities during the mission flown in support of the German ISAF Troops operating in Afghanistan.

Indeed, whereas all the 86 Transalls were given an anti-aircraft-fire protection system using kevlar and armoured plates from 1992 to 1999, two dozen aircraft were upgraded with the EloKa self-defense system that included RWR (Radar Warning Receiver), Chaff and Flare Dispensers (including those in a rather unusual position, above the fuselage), Missile Approach Warning System, Electronic Warfare Management System along with various sensors and a large array of ECM (Electronic Counter Measures) equipment.

Noteworthy, the one depicted in the photographs at Deci seems to be “patched up” in the area above the cockpit: considered it made its maiden flight in March 1963 it’s pretty normal such an ageing workhorse requires some patches until it’s replaced by the A-400M.

However, according to Danny Schneider, one of our readers, they painted it with this bright color to prevent overheating inside the cockpit and especially under the overhead panel when flying in hot areas. 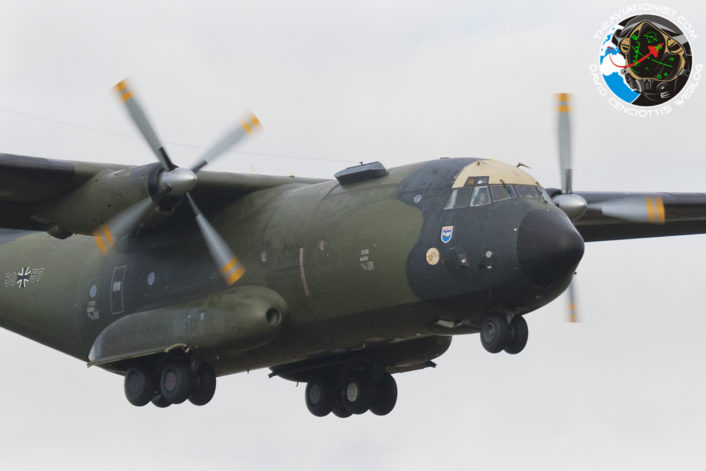 On Jan. 16, a Tornado fighter bomber belonging to the German Air Force crashed south east of Laubach, not far from Büchel airbase in central western Germany. Both the pilot and the navigator (a WSO […]