Photos and video of a “mysterious” plane circling over Denver are making the rounds. But the aircraft was “just” a U.S. Navy Doomsday plane.

On Nov. 16 people in the Denver metropolitan area saw a white, four-engined aircraft performing a racetrack for several times over Colorado before heading to Oklahoma. The aircraft could be tracked online on Flightradar24 by means of ADS-B using callsign Iron 99.

Even though some media outlets published some funny articles with headlines referring to a “mystery flight” or a “mysterious plane” there is really little mystery around that aircraft: it was an E-6B Mercury.

The use of “Iron 99” is also pretty standard: Iron is one of the radio callsigns of the VQ-3 “Ironmen”, a naval aviation squadron of the United States Navy based at Tinker Air Force Base, Oklahoma (incidentally, where the aircraft headed after orbiting over Denver….) 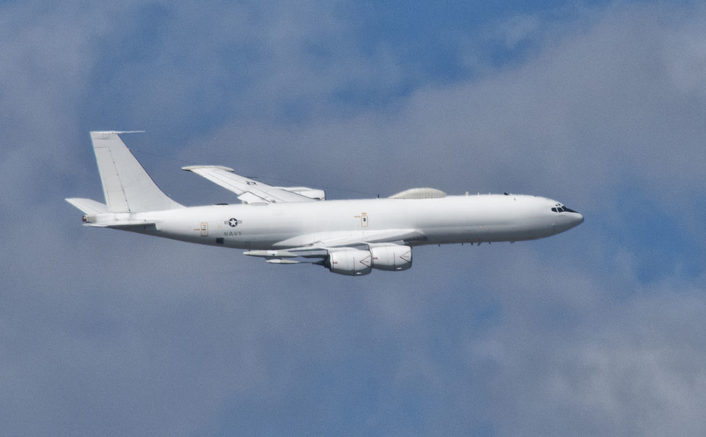 The U.S. Navy has a total fleet of sixteen E-6B Mercury (TACAMO – “TAke Charge And Move Out”) that play an extremely important role for U.S. National Security: they are used to relay instructions to the fleet ballistic missile submarines in case of nuclear war but also act as back ups of the four E-4Bs NAOC (National Alternate Operations Center), working as ABNCP (Airborne Command Post) platforms (hence “Doomsday Plane“).

The Mercury is capable to communicate on virtually every radio frequency band, on commercial satellites and on the Internet, using also a secure VOIP system. This aircraft usually operates flying orbits/circles while trailing their antennas or to exploit a particular geostationary satellite for radio comms.

How Social Media May Drive Our Perception of Military Aviation Safety

Ever wondered what a catapult shot looks like from the cockpit of a T-45 Goshawk? Here’s the HUD tape. Rob Roy is a former Naval Aviator who flew the C-2A Greyhound with the “Rawhides” of […]

Legacy and Super Hornet showing a concerning steady increase in “physiological episodes” that U.S. Navy calls “No.1 safety issue.” The F/A-18 Hornets of all variants seems to be affected by a serious issue: oxygen shortage, […]