An impressive rescue mission took place in 2015 in the skies over ISIL territory.

A KC-135 Stratotanker aircrew belonging to the 384th ARS (Air Refueling Squadron) from McConnell Air Force Base, Kansas saved an F-16 Fighting Falcon pilot from ejecting over ISIL territory last year, which could eventually have led to the pilot’s captivity or death.

While deployed in support of Operation Inherent Resolve in fact, the tanker responded to an F-16 fuel emergency and escorted the aircraft from ISIL territory to allied airspace.

The fighter was in the midst of an aerial refueling with the tanker when its fuel system broke down in mid-air, as explained by Capt. Nathanial Beer, 384th ARS pilot “The F-16 had a pressure disconnect after about 500 pounds of fuel. We were expecting to offload about 2,500 pounds.”

After the F-16 disconnected a second time, the pilot went through his checklists and told the tanker he had a fuel system emergency. With over 80 percent of his total fuel trapped and unusable, the F-16’s driver had only 15 minutes worth of gas.

Luckily for him the KC-135 aircrew saved his jet from fuel starvation escorting the F-16 to its base while refueling every 15 minutes to avoid an emergency.

Noteworthy, after having escorted the F-16 back, the tanker completed its mission with a 100 percent success rate. 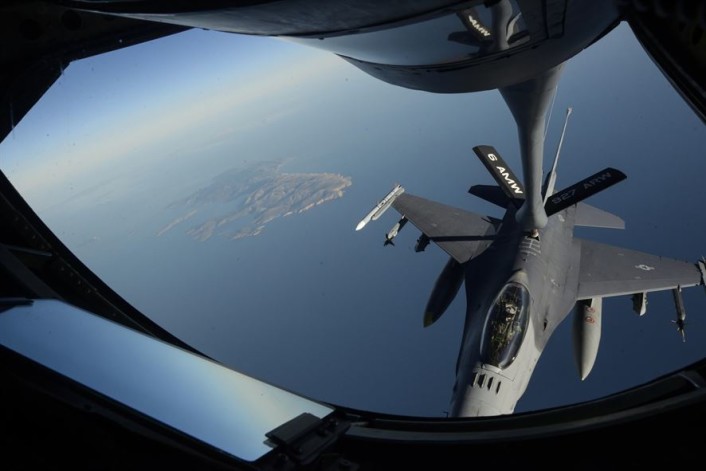 The IAF is now investigating why the Baraks weren’t moved from their underground hangars Last week Israel was hit by heavy rains which caused widespread flooding in several cities. Military installations weren’t spared by the […]

The Royal Bahraini Air Force (RBAF) has lost one of its F-16s performing a mission to support the Saudi-led air offensive in Yemen. The Bahrain Defence Force (BDF) General Command reported that am RBAF‘s F-16 […]