Airspace violations are more frequent than one might believe.

On Nov. 24, a Russian Air Force Su-24M that allegedly violated the Turkish airspace was shot down by an AIM-120C air-to-air missile fired by a TuAF F-16 in Combat Air Patrol.

Although the details of the incident are quite controversial, with the Russians claiming that no violation occurred nor was the Fencer warned by the TuAF (that has since then suspended its flight over Syria) as Ankara has said since the beginning, it is safe to say that violations occur every now and then and rarely they end up with the downing of the intruder.

Indeed, violations of the Turkish airspace were reported few days after the Russian Air Force contingent deployed to Latakia, in northwestern Syria, started pounding FSA and IS targets across the country.

On Oct. 3 and 4, NATO said a Russian Air Force Su-30SM and Su-24 aircraft violated Ankara’s sovereign airspace in the Hatay region in spite of “clear, timely and repeated warnings.” In that case, the RuAF admitted the violations, claiming they were due to “navigation errors.” TuAF F-16s in QRA (Quick Reaction Alert) were scrambled to identify the intruder, after which the Russian planes departed Turkish airspace. During the Oct. 3 incident, the Russian Su-30SM maintained a radar lock on one or both the F-16s for a full 5 minutes and 40 seconds: a quite unusual and provoking conduct by the Russian pilots.

Following the first incidents, Ankara said it would shot down any aircraft violating their sovereign airspace as done in the past with a Syrian Mig-23, a Mi-17 and an Iranian made Mohajer 4 UAV.

Whilst the alleged violation of the Turkey-Syria border by the Russian Su-24 is far from being unexpected considered the amount of intrusions reported since the beginning of October, far more surprising is the news that the Russians have also violated the Israeli airspace more than once in the past weeks.

“Russian pilots occasionally cross into Israeli airspace, but due to excellent defense coordination that began with Netanyahu’s meeting with Putin in which limits were set, the Israel Defense Forces and the Russian military agreed on security arrangements,” said General (res.) Amos Gilad, head of the Israeli Defense Ministry’s political-security division, as reported to Israeli media outlets.

The security protocol established between Israel and Russia should prevent incident like the one of Nov. 24 and the subsequent diplomatic crisis.

He added, “In the understandings with the Russians, we retain freedom of action in our attempts to prevent weapons getting through from Iran to Hezbollah.”

The skies over the disputed islands of the Aegean Sea are often violated by the Turkish Air Force F-16s and F-4s.

Greece claims 10 miles of air space around a chain of Greek islands lined up along the Turkish west coast, part of those are in very close proximity to the mainland, while Turkey recognizes only six miles (that is to say the extent of the Greek territorial waters, recognized by each other).

Many of the incidents take place within the four-mile radius, which Athens considers its sovereign airspace and Ankara considers international one; however, according to several reports, there are a number of unauthorised Turkish military flights directly over Greek islands themselves.

An article published by Politico last summer reported figures from research at the University of Thessaly, according to which there were 2,244 incursions of Turkish fighter jets and helicopters in 2014 alone.

Although it’s unclear how many of those +2,000 occurred within the contentious 4NM airspace (nor do we know the figures of the Greek violations logged on average by the Turkish Air Force besides this data from 2012), it’s quite clear that a border incident similar to the Russian Su-24 shoot-down is always around the corner over the Aegean Sea. Like the one that led to dogfight and subsequent a mid-air collision in 2006 (causing the death of a Greek pilot).

Anyway, although they were pretty upset by the Russian violation on Nov. 24, the Turkish authorities should be quite used to such kind of incursions, from both the intruder and the intruded standpoint. 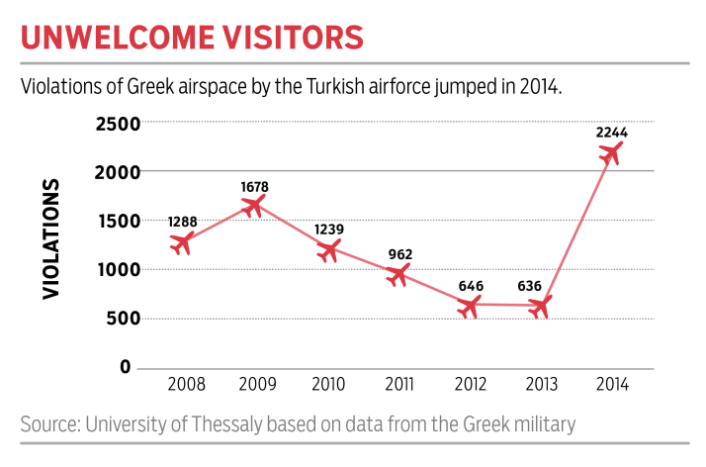 Close call: Russian Tu-22M Backfire bomber take off uses ALL of the runway

Backfire bombers can’t be refueled in-flight and the Russian Tu-22M Backfire shown in the following video must have been loaded with a lot of fuel. This could explain why the Russian bomber uses almost every […]

Let’s have a look at Anatolian Eagle 2019 at Konya, Turkey. Exercise Anatolian Eagle, is a very well-known series of exercises hosted by the Turkish Air Force held at the 3rd Main Jet Base – […]

Late on the afternoon (Central European Time) of Jun. 22, media outlets started to report that a Turkish Air Force F-4 Phantom has disappeared over the Eastern Mediterranean Sea, near its shared border with Syria. […]