Incredibly, the camera survived the crash.

The video in this post was allegedly filmed on Aug. 20, 2014, somewhere near Lugansk where a Ukrainian Mi-24 Hind gunship helicopter was hit and shot down by an anti-aircraft missile while on patrol with another helicopter of the same type.

It looks like the Hind was flying at low altitude, when it was hit by a missile: in a matter of seconds the helicopter hit the ground and (probably exploded) with the camera the crew members brought with them in the cockpit among the only surviving things.

The photograph below shows the wreckage of the chopper. 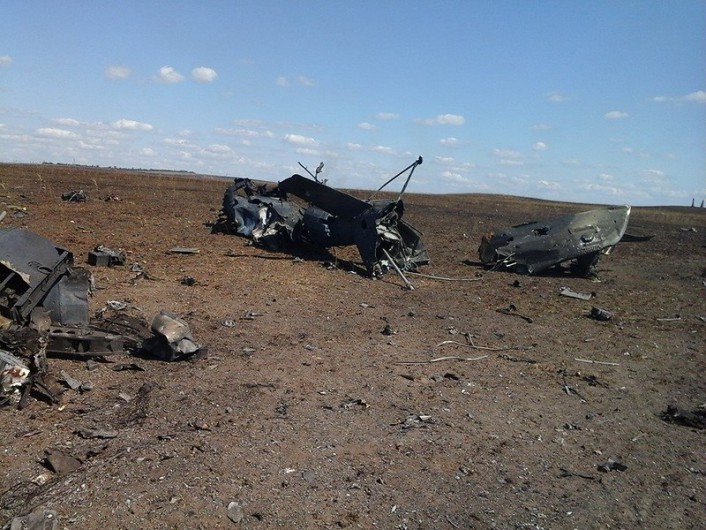 According to the information available on the Internet, the helicopter downed by the pro-Russia separatists was Mi-24P “Yellow 15” from the 7th Army Aviation Regiment, a gunship that had been already hit and damaged by Donetsk People Republic fighters near Slavyansk.

Several Mi-24 helicopters and many other Ukrainian aircraft have been shot down by MANPADS (Man Portable Air Defense Systems) in eastern Ukrainian during clashes with Russia-backed separatists.

H/T to Matt Fanning for the heads-up

Egyptian Demonstrator Gets Way Too Close To A Low Flying Helicopter. Or viceversa…..

Helicopters have been the main tools used to surveil the protests in Cairo, where running battles are continuing on the streets. In the following video, an Egyptian Air Force WS-61 Sea King can be seen […]

Poland has changed its priorities regarding acquisition of the helicopters. The general-purpose combat helicopter was to be the first purchase of the Polish Armed Forces, but now the weight has been shifted towards the assault choppers. […]