A civil registered U.S. King Air used to track high-value and time-sensitive targets, including people, has conducted some missions over western Tunisia.

From Mar. 21 to 26, a U.S. Beechcraft King Air 350ER has conducted reconnaissance missions over the western Tunisia regions where jidahist terrorists behind the Bardo Museum attack have been hiding.

The news, exposed by the Corriere della Sera newspaper, was unveiled by Tunisian bloggers who noticed the civil-registered plane on Flightradar24.com: in fact, although it was probably involved in an intelligence gathering mission, the King Air “N351DY” did not turn off its ADS-B transponder and could be clearly tracked on the popular website (as already happened to other U.S. spyplanes over Afghanistan…) as it circled over the Jebel Chambi mountain between 22,500 and 24,500 feet.

Noteworthy, the aircraft operated by Pantelleria airport, a little Italian island off Tunisia: most probably, deploying the plane to a Tunisian airport was not safe, Sigonella airbase, in Sicily, from where U.S. Global Hawk and Predator and Reaper drone operate, was too far and Pantelleria was chosen as the closest base for the clandestine task.

The N351DY is registered to Aircraft Logistics Group LLC, based at Oklahoma City, known to have cooperated with Pentagon in the past.

The plane is the civil version of the MC-12W, an ISR (Intelligence Surveillance Reconnaissance) platform operated by the U.S. Air Force and equipped with a full array of sensors, a ground exploitation cell, line-of-sight and satellite communications datalinks, a robust voice communications suite as well as an electro-optical infrared sensor with a laser illuminator and designator.

Here below is the track the plane flew on Mar. 22. On top of the article you find the route of Mar. 26’s mission, the last that could be tracked on FR24. 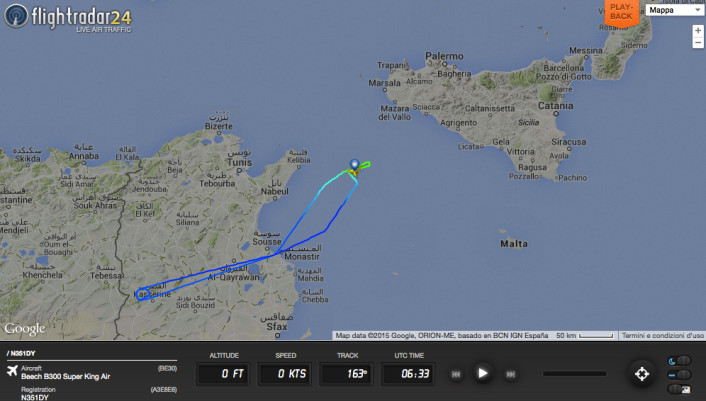 A new report highlights the risks of ADS-B transponders. But it focuses on technology rather than operation security. We have been writing about this topic since 2011. As most of our readers already know by […]

The white FEST C-32 to Andrews AFB using an FBI callsign on a "black" mission?

Once again a Foreign Emergency Support Team C-32 (B757) with registration 02-4452, belonging to the 227 SOF (Special Operations Flight) based at McGuire AFB, NJ, appeared on both FlightRadar24 and PlaneFinder on arrival to Andrews […]