Born as a long range escort fighter for U.S. Air Force Strategic Air Command (SAC) bombers, the McDonnell F-101 was developed in several versions. Both were involved in the Cuban Missile Crisis.

The McDonnell F-101 Voodoo was a supersonic fighter plane which flew with the United States Air Force (USAF) and the Royal Canadian Air Force (RCAF).

The F-101B was configured as a two seat interceptor for the Air Defense Command (ADC), the F-101C was used as tactical bomber relying on its beefed-up structure, and the RF-101C was the tactical reconnaissance version of the F-101C. These three models were used or kept on alert during the tense moments of the Cuban Missile Crisis.

When a U-2 revealed the presence of the Soviet R-12 (SS-4 in NATO designation) theater ballistic missile sites in Cuba on Oct. 14 1962, post-mission analysis highlighted the presence of SA-2 surface to air missiles. 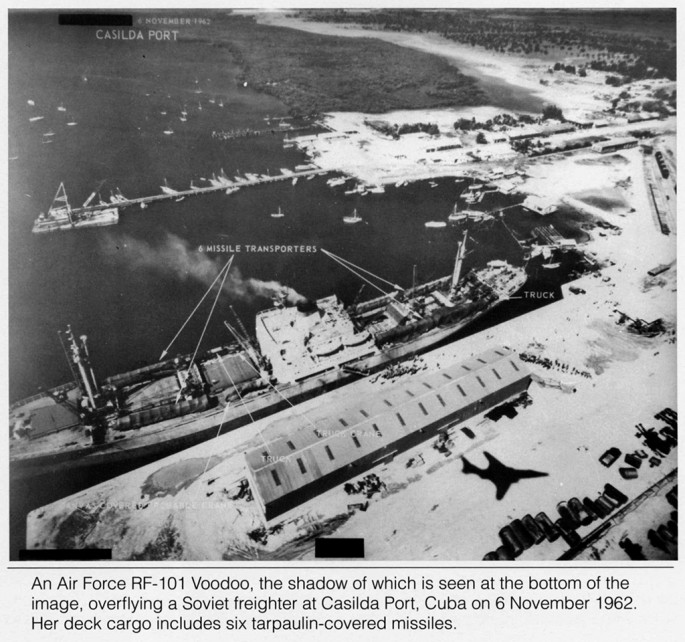 After President Kennedy announced that photos from American reconnaissance planes had disclosed the presence of Soviet surface to surface missile armed with nuclear warhead at Cuba, U.S. homeland air defense forces were put on heightened alert status, preparing for the imminent war.

“In the Air Force, while our bombers reinforced their around the clock airborne alert flights, fighters deployed to and near Florida, in preparation for tactical strikes, while our air defense units sent interceptors to emergency fields, for both survival and readiness should Soviet bombers attack,” Jonathan Myer, an F-101B pilot, recalls in Ted Spitzmiller’s “Century Series The USAF Quest for air supremacy 1950-1960” book.

“I remember our 13th FIS (Fighter Interceptor Squadron) aircrews listening tensely to President Kennedy’s October 22nd speech, as some of us prepared to deploy from Glasgow AFB (Air Force Base), Montana, to the municipal airport at Billings.”

The deployment was accomplished with the F-101Bs loaded with both the pair of AIR-2A Genie unguided rockets with nuclear warheads and the pair of infrared-homing AIM-4C Falcon missiles, mounted in the “rotodoor” (the F-101B weapons bay’s rotary armament door).

“We flew there fully loaded, in pairs and with our AIR-2A nucs and IR missiles ready for war, while maintenance and supplies followed by truck. Landing on Billings’ unprepared runway incurred a few cut tires, while our makeshift alert area was cordoned off and a 24 hour phone alert set up in a hangar. […] Fortunately, no Soviet escalation ensued and a couple of weeks later we returned to Glasgow to resume regular alert and training,” Myers says.

Bon Hanson was instead an 81st TFW (Tactical Fighter Wing) F-101C driver, who gave his account to Spitzmiller, explaining the preparations for a nuclear strike mission that had to be undertaken across the Atlantic Ocean, after the take off from RAF Bentwaters: “I was on alert the day the Cuban Missile Crisis balloon went up. It was around 0900, and we went to RED cockpit alert until nightfall, and then reverted to 15 min. But, initially we really thought we were going! And for the next week or more the whole wing was loaded and ready to launch! It was serious!”

Eventually, the Soviets withdrew their missiles from Cuba and the U.S. removed their Jupiter missiles from Turkey and later from Italy, thus avoiding World War III.

RF-101C Voodoos flew the reconnaissance flights that the provided Washington the required evidence that Soviet nuclear missile site were being removed from Cuba.

We can’t say whether it happened by accident or on purpose, but a U.S. unmanned spy aircraft broadcast its position for everyone to see while flying a long mission over northern Libya. It’s not a […]