During their stay in the UK, the B-52s from both Barksdale Air Force Base and Minot AFB, and the B-2s from Whiteman AFB, temporarily deployed to RAF Fairford, were supported by the KC-135 Stratotankers of the 100 ARW (Air Refueling Wing) based at RAF Mildenhall.

Indeed, as they routinely do when they operate from their homebase in Missouri, the two B-2s from the 509th Bomb Wing were involved a 20-hour training mission within USEUCOM and AFRICOM area of operation: the two stealth bombers, supported also by tankers launched from Lajes, Azores, flew to the south of Ascension, a volcanic island in the equatorial waters in South Atlantic Ocean, and back.

The aircraft took off on Wednesday at 15.00z LT and routed down towards Lands End and down towards an area off Portugal before running south down past the Canaries. They were refuelled by SPUR 61 flight south of the Azores taking them down towards the Cape Verde Islands. A second wave of tankers, SPUR 51 flight then refuelled them on their return journey before they arrived back at Fairford on Thursday 1200z.

Such round trip long range missions are normally flown from CONUS (Continental US), or from Diego Garcia and Andersen AFB at Guam, and are a bit rare from the UK even if RAF Fairford is one of three bases for B-2 operations outside the U.S.

Noteworthy, the Stealth Bombers mission was closely monitored by aircraft spotters and airband listeners who logged the aircraft throughout their flight (flown with radio callsign “ICOSA”).

Interestingly, while landing at the end of the mission flown the morning ahead of the 20 hr sortie, one of the B-2, AV-4 – 82-1069 “Spirit of Indiana” suffered a birdstrike, as the images taken by photographer Matthew Morris show (before and after the hit): fortunately, the “close encounter” did not cause any serious problem to the B-2, but it proved stealth bombers are invisible to radars…and birds. 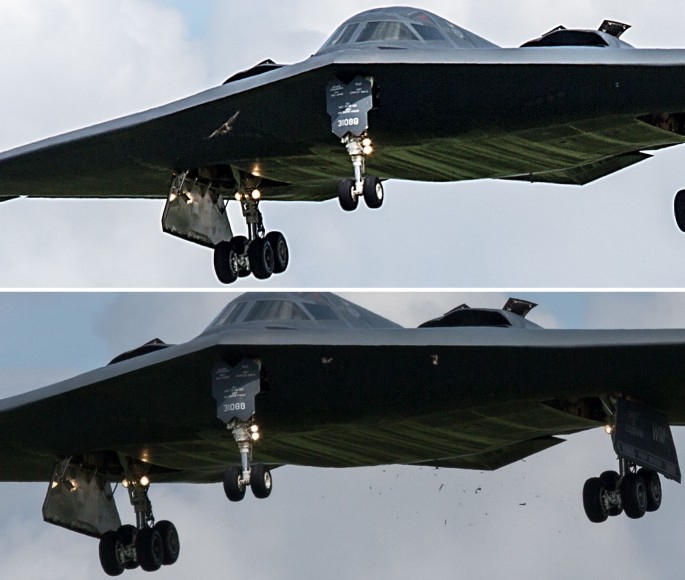 Steve Douglass and Dean Muskett were taking photos at Amarillo when they spotted the contrails of some mystery aircraft. What did they shot flying over Texas? The images you can see in this post were […]

A interesting photo shows a B-1B accelerate at night after refueling from a KC-135 B-1B bombers of the 7th Bomb Wing from Dyess AFB, deployed to Al Udeid airbase, in Qatar, have taken part in […]