Controlled from BAE Systems New Malden, DEN supports multiple concurrent activities at different security levels up to and including SECRET. It has similarities with a private cloud computing network which provides gateways to third party networks including JMNIAN and enables cross-site development, system integration, testing and trials activities (including Typhoon software development and F-35 interoperability trials) in support of strategic campaigns and programme delivery.

In other words, DEN is a secure network that can be extended on a per-node basis to allow inter-site trials and training activities.

DEN linked several simulators creating a live battlespace scenario in which Typhoon pilots at RAF Leuchars operated with air and maritime assets located at four sites across UK in the first training mission simulation of its kind. 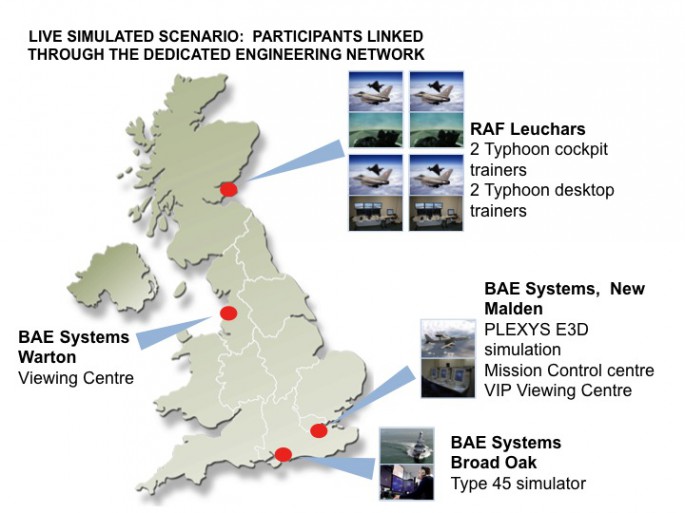 The aim of the synthetic training was to demonstrate the company’s ability to provide low cost effective training for complex, mission scenarios using key air, land and maritime military assets.

“Striking the right balance between live and synthetic training is of high priority to the Typhoon Force,” said Air Commodore Gary Waterfall, Typhoon Force Commander. “What we have seen today is a seamless integration of air and sea assets in a synthetic environment.  Proof that the technology exists today to train for tomorrow. “

Lieutenant Simon Holbrook, Type 45 Fighter Controller in the trial said:  “It was hugely beneficial from my point of view.  The interaction between the Type 45, E3-D and the four Typhoon simulators provided all the participants with a valuable opportunity to operate together efficiently and in a realistic scenario with all the benefits of simulated training.  As an Instructor at the Royal Navy School of Fighter Control,  I was impressed at how the exercise flowed given the different simulators contributing.  We have already fed through some lessons learnt from interaction with the E3D Sentry and Typhoon.”