On Jul. 11, 2013, Lt. Col. Jesus Antonio Caballero, head of the Research Group & Air Forces of the Spanish Air Force (Ejercito del Aire) 23 Wing in Talavera Air Base, completed 4,000 flying hours on the F-5 aircraft . This accreditation, obtained individually, is a unique landmark in the Spanish Air Force and even internationally, as to date, there is no evidence that any other pilot from countries that operate or have operated different versions of F-5, to have reached that milestone.

The historical flight during which Caballero reached 4,000 flying hours consisted of a air-to-air nterception training mission, included in the Plan of Instruction for IPs (instructor pilots) of the 23 Wing. 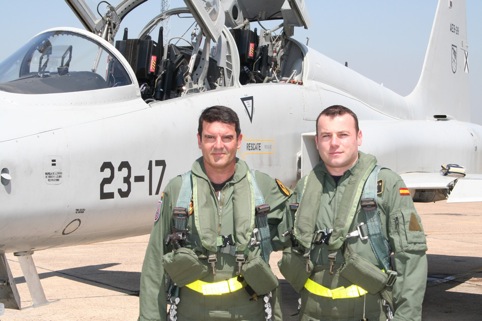 Lieutenant Colonel Caballero made his first flight in F-5 back in 1987, after being assigned to the 23 Wing as a student. He continued with that fighter in the 21 Wing Air Base in Morón and in the Center of Logistics Armaments and Experimentation (CLAEX) in Torrejon Air Base. From 1993 he returned to the 23 Wing as an IP, having piloted the F-5 A/RF/B & M versions of this veteran aircraft.

The 23 Wing’s main mission is to provide training, both theoretical and flights (Fighter & Attack Phase) to students in the 5th year of the Spanish Air Force Air Academy selected to perform the said phase.

Bought in the sixties, the Spanish Government took the decision to provide to the Spanish Air Force +50 F-5 A & B fighters built under license by CASA.

In recent years the F-5 has undergone a complete modernization, especially its avionics, to suit the teaching Fighter & Attack skills as a step towards next-generation aircrafts such as the F/A-18A+ Hornet and the Eurofighter Typhoon. This new version of the aircraft is called F-5M

All fighter pilots that currently fly in the Spanish Air Force were formed in the F-5M.

RAF Typhoons have exercised with visiting US B-52 bombers. RAF Typhoon FGR4 aircraft, based at RAF Coningsby, carried out a practice intercept on U.S. B-52 bombers deployed to RAF Fairford, UK, as part of Bomber […]

On Nov. 2, a Northrop F-5M aircraft belonging to the 23th Wing of the Spanish Air Force (Talavera la Real Air Base), suffered an accident that killed one of his crew, Major and instructor Angel […]