With CV-22s recently joining the U.S. Special Operations Forces in the UK, British aircraft enthusiasts and spotters will quickly get used to something common people may not immediately recognise: the Osprey’s typical glowing rotor tips.

Indeed, to help at night during formation flights as well as on the ground to show personnel the position of the blades and guide them to the safe areas and to the ramp, the CV-22s have two NVG (Night Vision Goggle) compatible dual mode LED “tip lights” on the end of each rotor blade whose brightness can be controlled by the aircrew: one visible from above, the other from the bottom.

Once the rotor is working, such tip lights create a virtual disk, that make the tilt-rotor aircraft visible in the darkness, as the image  below, taken by David Mackey of Macks Aviation Photography, shows.

The photograph is particularly interesting because unlike all the other long-exposure high-ISO images you can find on the web, it shows an Osprey more or less as a human eye sees it.

The image was captured on Aug. 15 and depicts “KNIFE71” departing RAF Mildenhall, in the UK. 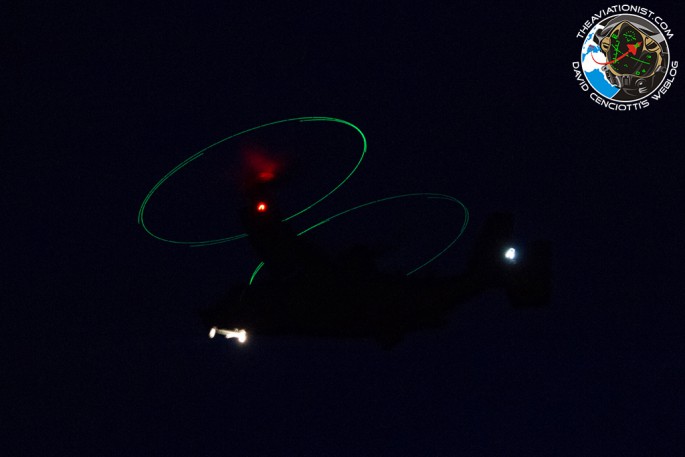 Here Is Japan’s First V-22: The First Osprey Tilt-Rotor Aircraft For A Military Outside Of The U.S.

The First V-22 For Japan Exposed By Photograph Taken At Amarillo During Engine Tests. The first of 17 V-22 Osprey tilt-rotor aircraft for the Japan Ground Self-Defense Force is about to perform its maiden flight […]

Separated and on the ground behind the enemy lines in Libya: Strike Eagle crew recount their lucky escape

The two crew members from the 48th Fighter Wing based at RAF Lakenheath UK have recently told CNN’s Barbara Starr of the night they found themselves separated and on the ground behind enemy lines in Libya. […]