Since radios were not so advanced, audio clips from World War Two are quite rare.

This make the following radio chatter clip of a Lancaster bomber being attacked by a German fighter during a war mission over Germany particularly interesting.

The crew seems to panic as the German plane engages the Lancaster shortly after the latter has dropped its bombed, and the captain at one point shouts “Okay, don’t shout all at once!”

Eventually one of the gunners manages to bring down the German fighter. 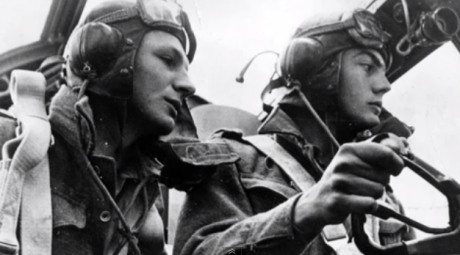 H/T to Wilson T King for the heads-up

The First Ever Jet Airstrikes. A titanic failure for the Germans.

The First Ever Jet Airstrike Was a Disaster. Here’s The Bizarre Story. When gunners spot them, they are stunned: their speed. No propellers. From out of the northeast, rocketing down from medium altitude in a […]

“The deflagration process turned into detonation”. Tallboy, the biggest unexploded World War II bomb ever found in Poland, dropped by a Royal Air Force Avro Lancaster in 1945, during the raid on the German cruiser […]

You never know what can wash ashore…. Dutch media outlets are reporting an interesting discovery that took place at Vrouwenpolder, in the southwestern province of Zeeland, in the Netherlands, where a lifeguard found something special […]