It must have been a smokey morning at Minot Air Force Base, North Dakota, when the following video was filmed.

Ten B-52H bombers take off during a Minimum Intervall Take Off (MITO) exercise, conducted to test the Stratofortresses’ ability to respond to threats at a moment’s notice.

During this training events, aircraft are launched by a method known “cart-starts” from cartridge starts: a small-controlled explosive is inserted into two of the eight engines of the heavy bomber. The charges jumpstart the engines (the remaining engines are started while the aircraft taxies to the runway) removing the need to use ground equipment normally used for aircraft’s startup.

Using cart-starts, startup time is cut from more than an hour to less than 10 minutes. 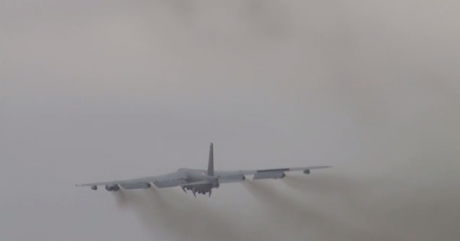 The two HH-60W Jolly Green II helicopters have arrived at Moody AFB and will be used to begin the transition from the HH-60G Pave Hawk. The U.S. Air Force received the first two operational HH-60W […]

The following video and audio were recorded by the U.S. Air Force F-16CG #88-0550 belonging to the 31st Fighter Wing from Aviano airbase, Italy, which was shot down during a combat mission over Serbia during […]

Northrop Grumman has just launched a new ad that teases next generation fighter jets. One year ago, Northrop Grumman, at that time competing with Lockheed Martin and Boeing for the LRS-B ( Long Range Strike-Bomber) […]