The Sea Harrier was crucial to the UK in the 1982 Air War in South America.

One cannot speak of Margaret Thatcher, who passed away on Apr. 8, 2013, without mentioning the 1982 Falklands – Malvinas a war that the UK was able to win thanks to a revolutionary airplane: the Harrier.

The origins of the “Jump Jet” date back to the Cold War.

The historical context imposed by the Cold War made the tactical experts wonder how to get rid off one of the basic drawbacks of an airplane – airplane is dependent on runways. The reality of nuclear war to come was brutal, airstrips and their coordinates were not secret, both in the West as well as in Soviet Russia. Obviously they would be destroyed  in the beginning of any conflict.

Assisted Take-off was another approach towards making take-offs shorter. It was issued by the Germans during the WWII. They were pioneers in the field nowadays referred to as JATO or RATO (Jet/Rocket Assisted Take-Off). This approach resulted from severe damages made to the German airstrips by the allied bombers at the end of WWII.

The length of the airstrips was limited because of them being damaged. The air superiority can be achieved by destroying the infrastructure needed for the airplanes to operate.

Dispersing the aircraft was an idea which was often talked about after the second world war. Some countries have developed a concept of highway strips – section of a highway that is specially built to allow landing of (mostly) military aircraft and to serve as a military airbase.

The advantages of using RATO not only included shortening the required runway length but also limit fuel consumption and prolong the range of the aircraft.

Using rocket engines had its downsides as well. First of all, the fuel is sensitive and requires special treatment. Second, the additional trained crew for rocket maintenance is needed.

JATO technology was broadly researched in the USA.

Bombers and other jets had big requirements towards the runways. Without long runways they were not able to operate. Nevertheless, use of RATO throughout the Cold War period was limited. Tactical danger of a nuclear strike has contributed to emergence of ZLL or ZLTO programme (Zero Lenght Launch / Zero Length Take-Off).

The system has been developed by the Martin company, which, in the early stage of the test programme has used disabled F-84 fighter jets. F-84 had a rocket engine installed in the back section of the fuselage and it was shot into the desert. Test programme was started on Dec. 15, 1953.

On Jan. 5, 1954 the first piloted launch took place. The worries (to be proven wrong later) considered the high G-loads the pilots were to face during the take-off procedure. 3.5Gs were recorded, not much more than G-load of an aircraft carrier catapult take-off.

F-84 was driven up to 175MPH – well above the stall speed. Nevertheless the programme was abandoned.

An interesting application of the JATO technology was the C-130 Hercules destined to the Credible Sport operation. The U.S. planned a hostage rescue mission in Iran in the 1980. The plan was courageous – it assumed C-130 landing and taking-off from a football stadium the hostages were held in proximity of.

The XFC-130H planes had been modified by installing rocket engines on the fuselage, not only to assist take-off but also to shorten the space required for landing. Additional modifications included arrestor hook so that big plane could land on an aircraft carrier.

Nevertheless, the problems which occurred at programming the rocket sequence made the tacticians turn towards a different rescuing plan.

British Rolls-Royce started  its VTOL experiments from the early 50s.

The Flying Bedstead project used 2 engines – one for vertical flight and the second one for horizontal movement. The project is notable because of the first use of jet engines for providing the control in hover later applied in the lunar landing module. The platform was the springboard for what was to become a foundation for the best known VTOL jet in history.

Revolution came together with introduction of Rolls Royce Pegasus Engine and P.11.27 known today as Harrier.

It was developed in mid 1960s, as a first of the practical VTOL concepts. The thing that made the Harrier different from other designs at the time was its engine – the Pegasus. The concept surpassed the contemporary VTOL designs in a sense that they either took-off standing on their tail – that was far from being convenient for the pilots – or needed several powerplants to achieve VTOL.

The designers had to overcome many difficult problems in designs such as Convair Pogo or Lockheed Salmon and Rolls-Royce Flying Bedstead. And the British approached the issue from completely different angle,  succeeding.

Harrier was designed by Hawker Company in 1957 in a form of P.11.27 Kestrel prototype in cooperation with other NATO countries.

The Pegasus Engine was the strong point of the new aircraft since it simplified what other designs (e.g. French Balzac) complicated. The concept works as a basic thrust-vectoring – nothing unusual now, in 2013, but quite extraordinary in the ’60s.

Nevertheless the concept was not really trusted, and it took almost 20 years for it to prove it was useful.

In the mid ’60s the Harrier was the only VTOL aircraft in the market. But its performance in comparison with the conventional designs of that period was not really satisfying. It was subsonic and it could not carry much of armament. Still the U.S. Marines considered it was extremely useful as it did not need runways. In the context of nuclear danger, that feature was a clear advantage.

U.S. Marines bought the Harrier in 1968, and in the following year so did RAF.

In the RAF, Harrier did not play a role of a frontline fighter, it was rather a CAS aircraft which did not need runways to operate. However, changes were to come, as the Royal Navy did not have big carriers at the time.

Being faster than a helicopter, Harrier would be a perfect means for providing cover to the Royal Navy. This is when Sea Harrier was created. It was basically a Harrier fitted with a radar what would make it less of a CAS aircraft and more of a fighter.

The engineers were saying that they need a small local war to let the Harrier prove its capabilities, and they had it. If it was not for the 20 Harriers that initially took part in the campaign, Margaret Thatcher would have probably lost the war.

Nevertheless, the inequality in air-power was significant, as at the beginning of the conflict it was 20 Harriers vs. 200 airplanes of the Argentinian Air Force.

Additional details on the Falklands intervention can be found in this article by Richard Clements published on The Aviationist for the 30th anniversary of the war. 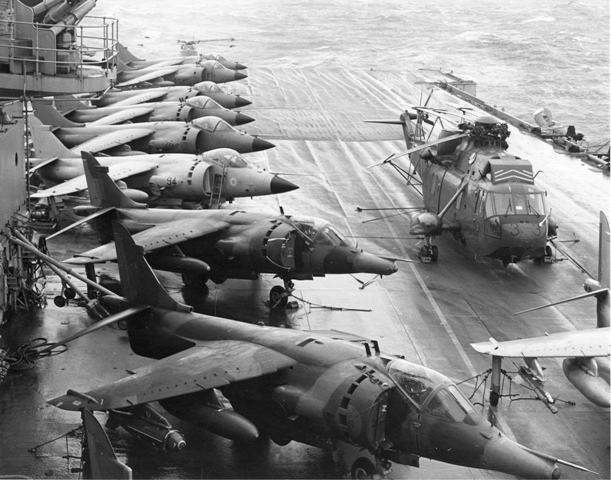 The war started on May 1, 1982 with the attack on Port Stanley. The enemy for the Harrier – Mirage airplanes – had twice the speed and performance of the Jump Jet. Nevertheless, unique thrust vectoring feature and the hook maneuver let the British pilots achieve the first 2 kills during the war.

However, on May 6, 1982, two Harriers were lost due to the terrible weather conditions and fog: they collided mid-air. There were only 18 aircraft left protecting the Royal Navy. Until May 21, Sea Harriers achieved 9 kills, and RAF GR.3 Harriers were on their way on a container ship – Atlantic Conveyor. When they arrived they overtook the air-to-ground tasks, leaving the air-to-air sorties to the Sea Harrier.

Although some sources suggest Argentinian pilots were undertrained, this is probably just a myth: one of the most important obstacles they faced was that they operated from mainland Argentine and this left them just a few minutes in the target zone before being forced to return. The objectives given to them during the briefings were to avoid the RAF and Royal Navy’s fighters and to bomb the ships at all costs.

On June 6, the Argentinian Skyhawks were attacking the British Fleet, when Harriers intercepted them only one of the four taking part in the attack escaped.

However, it was not easy for the British pilots either. The weather conditions were terrible, with the fog and 50 feet waves on the Atlantic. The Argentinian planes also suffered from what the sea looked like, because after Port Stanley was overtaken they had to fly from the mainland, continental part of the country.

The combat was not easy. Eight planes at a time were stationed on board the aircraft carrier and one pilot spent the entire night on alert in the Harrier cockpit. That was really excruciating for the crews.

The war ended on June 14 when Harrier jets flew their last sortie disabling the Port Stanley. Without them, winning that war so far away from the UK would be practically impossible.

And Margaret Thatcher would not be probably that well known.

If you want to know what an airbase in Central Europe was like during the Cold War, visit Weeze (ex RAF Laarbruch)

During early 1945 the allies were building up for the final push across the Rhine and found themselves in need of several airfields close to the front line. Advanced Landing Ground Goch (B-100) was built […]

The tension is high in the Black Sea area, where Russia says it fired warning shots at British warship that had allegedly entered Russian territorial waters near Crimea. But the British MOD says no shots […]