Whilst much has been written about the British involvement in the Falklands/Malvinas conflict a short story was written by an Argentinean pilot who was involved in the attack on the beach head at San Carlos.

The article written a year after the conflict finished describes how Captain Alberto Jorge Philippi took off from the Rio Grande naval base as a three ship A-4 Skyhawk formation and headed towards the Malvinas at 27,000 feet.

Even though the radar altimeter was set to sound at 30 feet, Philippi mentions how it went off numerous occasions as they sped up the sound towards the British fleet which was in the process of landing thousands of troops from amphibious landing craft.

Philippi then spotted the masts of a ship amongst the rocks at his 11 O’clock and signalled to his colleagues this was to be their target. After closing to the rocks to hide his aircraft and confuse the frigates fire control radar, Philippi turned hard wing tip skimming the wave tops to bring the target onto his nose.

Once Philippi was 1,000 – 1,500 meters from the Frigate (HMS Ardent) he performed a pop-up delivery from around 300 feet, waited for the cross hairs to meet over the bow of the ship and released his weapons.

Once the bombs were away, Philippi turned hard to the right whilst loosing the altitude he had gained to deliver his weapons back down to the 50 feet he was at prior to release. 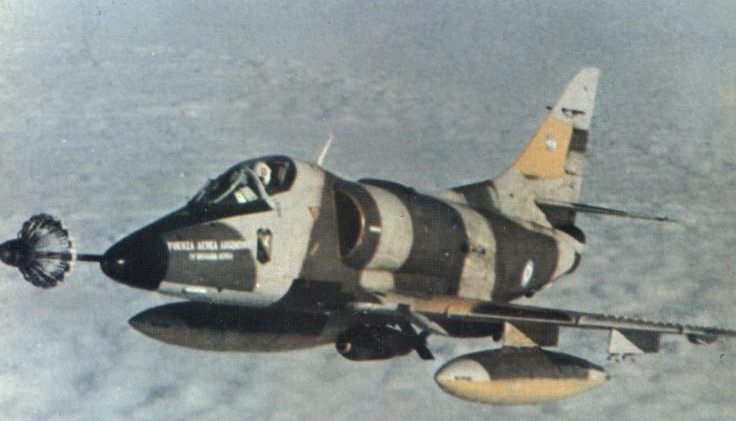 Seconds later, Philippi’s colleague Jose Cesar Arca’s voice came over the radio and said “Very Good Sir” as the bombs impacted the back of the ship. Arca’s bombs also found their target even though Arca had flown through the debris and smoke kicked up by Philippi.

The pilots had decided to escape using the route they had used to get to the target area but, within minutes, Marcelo Gustavo Marquez, the third pilot of the same formation, shouted “Harrier! Harrier!” down his radio.

The A-4 pilots immediately jettisoned their external stores to escape and seek safety in the clouds. Whilst in the process of ejecting the external stores, Philippi felt an explosion at the back of his jet and immediately felt the nose of the jet rise uncontrollably. As he wrestled with the increasingly unresponsive stick he took a look over his right shoulder to see the Sea Harrier at some 150 metres away. 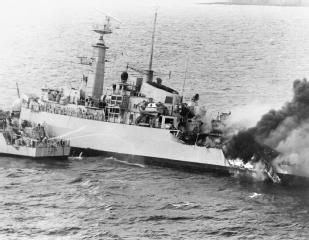 “I am going to eject, I am well” Phillipi said over his radio and with that he opened the speed brakes to reduce speed, placed his hand on the ejection handle and pulled. The force of the ejection knocked Philippi out and he came to hanging from his parachute within cloud: he had lost his helmet and mask during the ejection, but thanked God he was still alive.

Whilst still hanging from the chute Philippi removed his boots, inflated his life jacket and loosened his harness before making a slash into the sea some 100 metres from shore.

After a rather hard swim to shore the Skyhawk pilot did what any downed pilot does and activated his distress signal and waited to be picked up. He then witnessed one of the British ships bombard a grounded Argentine ship thinking it was still a threat.

Phillipi headed south and was alone for three days before coming across a sheep farm where the farmer fed him, gave him some clothes before he was picked up by helicopter and flown to Darwin, where Philippi’s problems didn’t end. There he witnessed the attacks by the Harriers and British Army and eventually flew out on the last helicopter to Puerto Argentino (Port Stanley).

A couple of days later Philippi was flown back to the mainland on a C-130, which did the whole trip at 50 feet.

This Impressive Image Was Taken On This Day In 1982: Argentine A-4B Skyhawks low level attack on HMS Broadsword

Argentine A-4 Skyhawks flew ultra low level to attack the Royal Navy warships during the Falklands War in 1982. May 25 is Argentina’s National Day. On that day in 1982 the Fuerza Aérea Argentina (Argentine […]