Even if its shape is quite peculiar and its design shows inputs from past and current radar-evading projects (including the X-32, the X-36, the Boeing Bird of Prey, the F-22 and the F-35 Lightning II), the indigenous plane showcased during the Ten-Day Dawn ceremonies held in Tehran features a number of oddities that clearly prove the F-313 can’t fly.

Actually, as a reader of The Aviationist pointed out in a comment left to a previous article on the Qaher prototype, according to Webster’s dictionary, one of the many definitions of the word “fly” is “to move in or pass through the air with wings”.

Therefore, using that definition very loosely, if you lifted the F-313 mock up with a crane and drop it, technically it would “fly”.

Someone believes the new Iranian plane can’t take to the air just because it has an weird shape with tiny wings unable to generate the required lift and air intakes located where they can only get turbulent air at certain angles-of-attack.

Shape aside, the Qaher on display at Tehran last week will never fly for several more reasons, despite the (photoshopped) images appearing on Iranian media allegedly showing it flying somewhere above the clouds (see below).

Anyway, it is interesting to notice that not always unlikely appearances imply inability to fly.

This is what the Italian Flying Rooster aircraft seems to prove. Designed by Italian aircraft designer and builder Ottone Baggio, the “Aerogallo” made its first flight on Dec. 26, 2011. Since then, the Rooster plane, in the hands of test pilot Daniele Beltrame, has become one of the highlights of last airshow season in Italy. 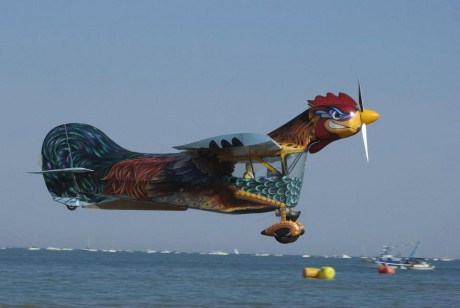 The aircraft features a Rooster head and neck jutting out of the high wing’s leading edge which house the engine, wooden wings, steel tube fuselage covered in fabric, and a proper paint job. 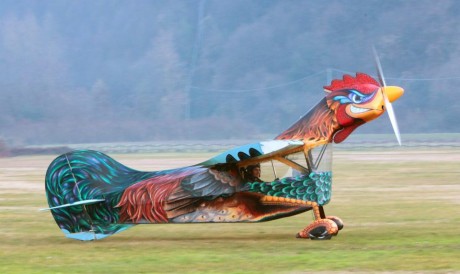 The control systems is as weird as the aircraft itself: the control sticks comes down from the cockpit’s roof and is counter-instictive – you have to pull it back to dive and to push it forward to climb. Hard to believe, still, working, as the above images prove.

Is this China’s next generation stealth fighter bomber?

Most probably, not. However, the artworks  are interesting. Although China is known to be working also on a new stealth fighter bomber, we don’t know much about the H-20, as the aircraft is believed to […]