Based on the CCTV footage, the brand new turbojet, a hybrid between the U.S. C-17, the Airbus A400M Atlas four-engine turboprop, and the nose section the Antonov An-70 performed a short test flight with the extended landing gear, before landing back. 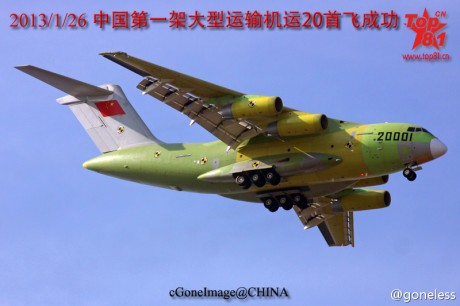 No, The Image Above Is Not Photoshopped: There Is A Chinese Equivalent Of The Star Wars Canyon In The U.S. Or The Mach Loop In UK. Scheduled for release on Sept. 30, 2017, Sky Hunter […]

Posted by Alert5 today, the following image shows the first photographs of China’s new four-engine military airlifter. The large military transport aircraft is allegedly designed Y-20 and, nose aside, its shape is almost identical to […]