On Sept. 21, strapped atop a Boeing 747 SCA (Shuttle Carrier Aircraft), the space shuttle Endeavour flew over the L.A. area on a tour across many iconic SoCal destinations that brought it from Edwards Air Force Base, to Los Angeles International Airport.

During the flight, the modified Boeing 747 flew over the Antelope Valley before heading up north to Sacramento and San Francisco, and  then came back down to fly over some of Southern California’s most iconic landmarks such as the Getty Center, City Hall, Griffith Park, Universal Studios, Disneyland as well as the California Science Center, where it will be put on display.

On arrival at Edwards AFB on Sept. 20, the Boeing 747 with the Endeavour taxied by an F-35A CTOL (Conventional Take Off and Landing) AF-02 with 461st FLTS (Flight Test Squadron) carrying a dummy AIM-9X, where Lockheed Martin photographer Paul Weatherman took the following picture. 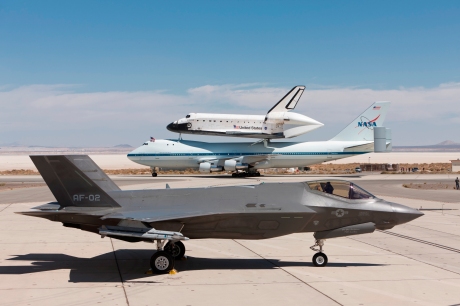 About David Cenciotti 4425 Articles
WebsiteFacebookTwitterLinkedIn instagram
David Cenciotti is a freelance journalist based in Rome, Italy. He is the Founder and Editor of “The Aviationist”, one of the world’s most famous and read military aviation blogs. Since 1996, he has written for major worldwide magazines, including Air Forces Monthly, Combat Aircraft, and many others, covering aviation, defense, war, industry, intelligence, crime and cyberwar. He has reported from the U.S., Europe, Australia and Syria, and flown several combat planes with different air forces. He is a former 2nd Lt. of the Italian Air Force, a private pilot and a graduate in Computer Engineering. He has written four books.

An F-35 performed some high-speed passes through the famous “Jedi Transition” in the Death Valley. Generating visible shockwaves. The image in this post was taken by world-renowned Dutch photographer Frank Crébas in the Death Valley […]

Nellis AFB near Las Vegas, is one of the airbases where you can see F-35 Joint Strike Fighters fly. Nellis AFB, Nevada, is one of the most interesting and busiest airbases in the US. Even […]