The top image shows an F/A-18E Super Hornet from the “Dambusters” of VFA-195 as it flies over the USS George Washington (CVN 73) aircraft carrier.

The photograph is not only cool because it depicts the Strike Fighter Squadron’s CAG bird, but also because another flight of two F-18s can be seen at lower altitude (right).

All aircraft returning to the carrier have to enter the Carrier Control Aerea, a circular airspace within a radius of 50 nautical miles around the carrier, extending upward from the surface to infinity. Within the CCA, all traffic is usually controlled by the CATCC (Carrier Air Traffic Control Center) and inbound flights are normally in radio contact with the “marshal control” who radios clearances within the marshal pattern.

The actual procedure for holding and landing depends on the weather conditions.

Under Case I recovery (meaning more or less “good weather”, with ceiling of at least 3,000 feet and 5 miles visibility within the carrier control zone – a circular airspace within 5 miles horizontal radius from the carrier, extending upwar from the surface to 2,500 feet) the traffics wait their turn for final approach to landing circling in a holding pattern.

For jets and turboprops the holding pattern is a left-hand pattern more or less tangent to the BRC (Base Recovery Course – magnetic heading of the ship) with the ship in the 3-o’clock position and a maximum diameter of 5 nm.
Aircraft circle at altitudes from 2,000 feet upward at various levels with a vertical separation of 1,000 feet.

Once the flight deck is free for landings, the lowest aircraft in the “stack”, leave their altitude to enter the landing pattern while the flights above, one by one, descend to the lower level vacated by the preceding flight.

In accordance with the EAT (Expected Approach Time) the aircraft depart the holding in such a way to reach the ‘”initial”, 3 miles astern at 800 feet altitude. Thereafter a “break” and a subsequent spin pattern is flown at 1,200 feet within 3 nm of the ship.

Aircraft in the landing pattern, properly separated (no more than 6 at any given time), continue to fly the downwind at 600 feet, perform base turn and align with the ship, astern at about 350 to 400 feet.

From there the Improved Fresnel Lens Optical Landing System (IFLOLS) lights provide the pilot with a visual indication of proper approach path whereas Landing Signal Officers radio suggestions to adjust the path. 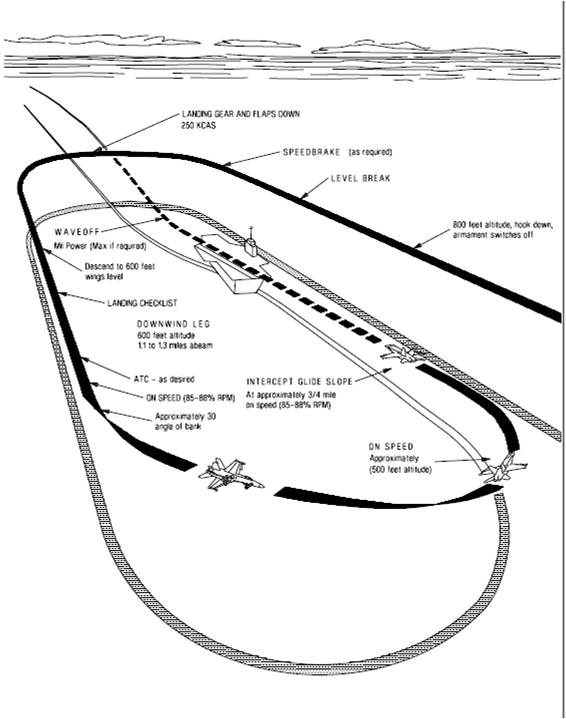 A rare image taken from inside the cockpit of a J-15 fighter jet. Not only Western fighter jocks love self-portrait shots (known as “selfies“). This image shows a pilot of the People’s Liberation Army Naval […]

Previous debriefings: Day 1 Day 2 Day 3 Day 4 The news of Day 5 is that the Libyan Arab Republic Air Force “no longer exists as a fighting force”, a statement that impressed both […]