On Jun. 8, the news of a presumed attack on USS Enterprise spread on Twitter.

It all had started few days earlier, with someone who had heard from a “credible source” (reportedly a wife of a sailor on deployment or something like that) the news that the “Big E” had been attacked by four enemy planes.

As soon as I was asked by some friends if I had more details about the attack on the Mediterranean Sea, I answered that the news was at least weird because the aircraft carrier was not in the Mediterranean Sea but in the 5th Fleet Area of Operations (meaning somewhere between Suez and the Horn of Africa).

And, above all, wherever it actually is, attacking a U.S. flattop on deployment is a suicidal act of war that would imply an immediate retaliation.

Anyway, later the US Navy officially denied the attack on Twitter:

@USNavy From U.S. Fifth Fleet–USS #Enterprise completed a routine, nonthreatening, transit of the Strait of #Hormuz

As already explained on this blog several times, being one of the most powerful tools in the hands of Washington, aircraft carriers among the most ambitious targets of any anti-American country.

That’s why they are also some of the most heavily defended assets of the U.S. arsenal.

Therefore, an embarked air wing is worth a small autonomous air force capable to perform a wide variety of missions.

There are also some E-2C Hawkeyes, aircraft that can perform Air Space Management and Tanker Coordination tasks, to manage and deconflict planes (as done for traffic flying in the Afghan airspace during OEF tasks) and provide the “picture” to the ship’s CDC (Combat Direction Center) that can be literally interconnected to any other AEW (Airborne Early Warning) platform to improve the situational awareness.

The CDC is responsible for the tactical management of all the missions launched by the carrier, by means of fighter and mission controllers whose radar screens can be fed with the tracks discovered at long distance by the Hawkeyes, one of those is always flying and ready to guide interceptors (both on alert and flying) to the identification of intruders that they can detect from several hundred miles away.

Moreover, a nuclear aircraft carrier on deployment does not travel alone as it is “only” the flagship of a Carrier Strike Group that usually includes two AEGIS destroyers,  a Ticonderoga class missile cruiser, a Perry-class frigate and, although they are not officially attached to the CSG, a nuclear submarine and various supporting vessel, whose task is, among the others, to defend the flattops from enemy aerial or maritime attack.

As you may understand, especially when it sails in troubled waters, all the aircraft carrier’s defenses (including surface to air missiles) are on heightened alert status and almost no suspect aircraft approaching the ship would go unnoticed.

This means that attacking an aircraft carrier with conventional combat planes (even if they fly at insanely low altitude) is not an option: unless you have stealth bombers with stand-off stealth missiles, it would be both uneffective and suicidal.

A bit more dangerous could be the stealthy Iranian submarines Tehran claims to be capable to hide on the sea bad and use to target aircraft carriers passing nearby as well as, the “carrier killer” ASBMs (Anti-Ship Ballistic Missiles), with a range of 3,000 km and speed in excess of Mach 10 that, in the future could be used to target a U.S. aircraft flattop at sea. 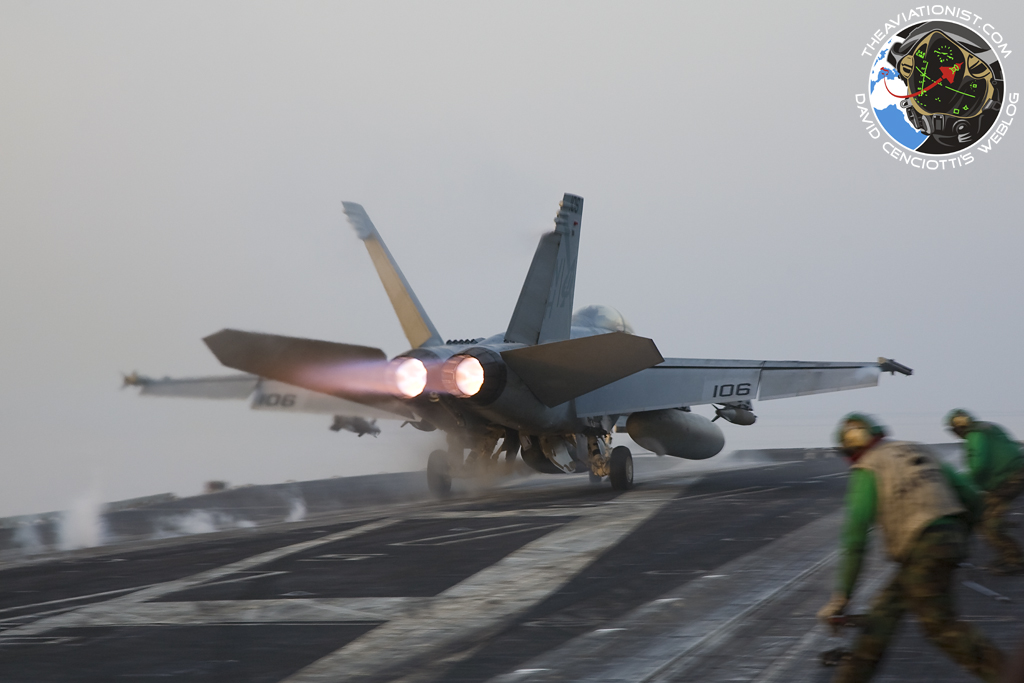 Curious photo: This is not a Hollywood film set but the U.S. Marine Corps F-18 Hornet simulator

USS Enterprise (CVN-65) was inactivated on Dec. 1 after 5 decades of service. From her commissioning as the world’s first nuclear powered aircraft carrier in November of 1961 to her final deployment ending November 2012, […]

E-2C Hawkeye Night Carrier Landing from the cockpit. With radio comms. The following video was filmed on Apr. 16, 2013, and shows a night (let’s say a sunset) carrier arrested landing by a VAW-121 E-2C […]