Under the name of Sant Arpia, the Mohajer 2, a quite famous Made-in-Iran drone, is currently flying in Venezuela.

Reportedly operating from the Cavim (CA Venezolana de Industria Militares) Maracay factory, where a new UAV facility has been unveiled by recent satellite imagery, the Mohajer 2 is a light unarmed drone that can be used for surveillance missions within a range of 50 km from the departure airfield at a speed of 200 km/h. Its ceiling is 11,000 feet of altitude and endurance is reported to be around 90 minutes.

Being equipped with skids, the Mohajer 2 is recovered using a recovery chute.

Although the dozen are believed to have been slightly modified by Caracas, the Mohajer 2 is an Iranian UAV model and, as such, it could not be purchased by Chavez, because of the embargo on the ayatollah regime.

Moreover, as highlighted by the special correspondent in Washington for the Spanish ABC.es Emili J. Blasco, the technology transfer agreement worth 28 million USD would seem to excede the price of a dozen drones (three of those crashed) that were purchased by Venezuela.

Indeed, along with a drone factory that has not come into operation, some more facilities have been built at Cavim. What Iranian personnel is doing inside the other facitilies remains a mystery. Maybe the mystery that U.S. drones aim to investigate.

The following image, published on several forums around the world (attribution hence impossible to determine), shows a Venezuelan Sant Arpia: noteworthy the tail section wears registration Arpia-002 while front section is marked “Arpia-003”. Does this mean the drone is made up of parts from different examples? 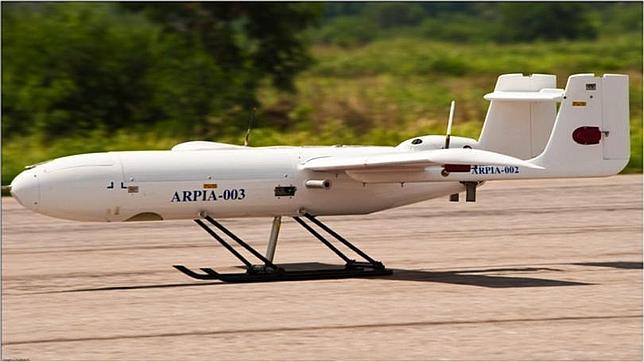 Along with the Sant Arpia, the Fuerza Aérea Venezolana (FAV) operates the ANT-1X, a smaller drone used for ISR (Intelligence Surveillance Reconnaissance) purposes.

Mystery Drone exposed by satellite imagery at Lockheed Martin's Skunk Works update: it was already there in 2009…

Do you remember the mysterious UAV quitely sitting open-air at Lockheed Martin’s Advanced Development Program Facility at Palmdale airport, California? Unveiled by satellite imagery dated Dec. 4, 2011, the “new” drone has a signature that […]

Incidents involving heavy radiation leakages are quite difficult to monitor as they pose serious threat and hazard to all personnel who have to come close to it. That’s why robots are perfectly suited for this […]