On Jun. 11, the U.S. Navy announced that one of its nearly 200M USD Broad Area Maritime Surveillance (BAMS) demonstrator aircraft crashed during a test flight near Bloodworth Island in, Dorchester County, Maryland.

The Navy was quick to point out that no one was injured in the crash and no property was damaged and officials were dispatched to investigate the cause of the crash.

BAMS uses the Northrop Grumman RQ-4 Global Hawk airframe but has a completely different radar and surveillance equipment, or at least it will do once in service.

The Navy acquired 5 Globals Hawks from the now cancelled Air Force program to use as test beds.

The latest crash, one in a long line of setbacks for the Global Hawk, which has already been cancelled by the Air Force sparking an immediate reaction by Northrop Grumman on Social Media, because it did not meet its obligations, does raise the question: does the Navy have the apatite to continue with the type’s development?

If it continues, the BAMS will have a range of some 9,550 miles with an endurance of 24 hours. One of its forward operating bases will be NAS Sigonella, Sicily, Italy, selected to be future’s drone world capital. But the key to its upgraded Intelligence, Surveillance, and Reconnaissance (ISR) capability is a brand new Active Electronically Scanned Array (AESA) radar that has been developed by Northrop.

The interesting thing about this new radar is it combines electronic scanning with mechanical movement, giving the BAMS a 360 degree field of view of anything below it, rather being fixed radar like all other AESA radars are.

Another new feature on BAMS is what the Navy calls an “Due Regard” radar which has been developed by ITT Exelis Inc. which will scan the airspace up to 110 degrees either side of BAMS nose for other aircraft. Something that will be important when the laws for UAV’s flying in civilian airspace with other manned aircraft comes into force during 2015.

Something else that has been mentioned that aviation radio enthusiast that first became aware of during the Air War in Libya during 2011 is that BAMS will have a two way radio meaning the operator can communicate with local Air Traffic Control, along with being fitted with ADS-B (Automatic Dependent Surveillance Broadcast) and TCAS (Traffic Collision Avoidance System).

Considered its unit price and previous failures, is this the final nail in the coffin for Global Hawk?

At the moment it’s too early to say but it does look if the giant Navy drone is on borrowed time. 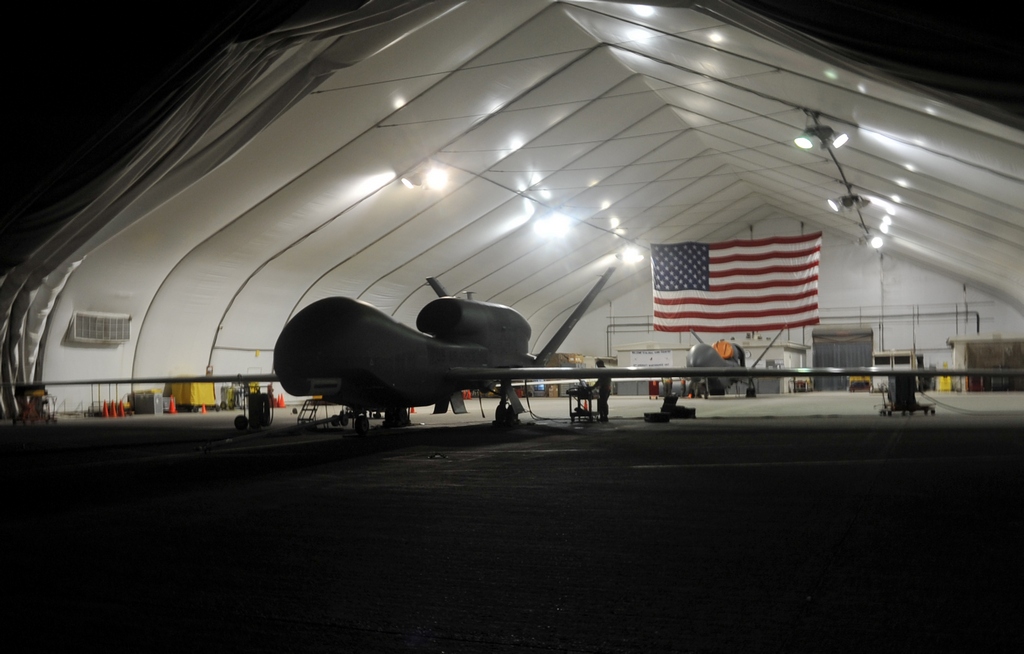 Uploaded on Mar. 24, 2012, these videos show the made-in-Iran drone, known as “Pahpad”, taking off and operating from Hamah airbase in the city of Hama, in the west part of Syria, north of Damascus. […]