Just posted by U.S. Navy Pacific Fleet on their Flickr photostream, the following image shows the Nimitz-class aircraft carrier USS Carl Vinson (CVN 70) as it arrives at Joint Base Pearl Harbor-Hickam (JBPHH) for its final port visit in Hawaii before returning to its homeport in San Diego following a six-month WestPac (Western Pacific) and OEF (Operation Enduring Freedom) cruise.

Don’t blame me for the following comment, but as soon as I saw the photograph, I could not help but notice that those depicted in the photo could be the only F-22 stealth planes not choking their pilots.

Indeed, in spite of the recurrent hypoxia symptoms experienced by several Air Force pilots, some of whom have refused to fly the Raptor until the flaw continues, the Pentagon has not grounded the F-22 fleet, unlike the USAF that banned flight operations with the 5th generation fighter last year.

Lockheed Martin’s troubled plane will be only restricted to fly near a “proximate landing location” in order to give pilots the possibility to land quickly if their planes’ On Board Oxygen Generating System (OBOGS) fail. 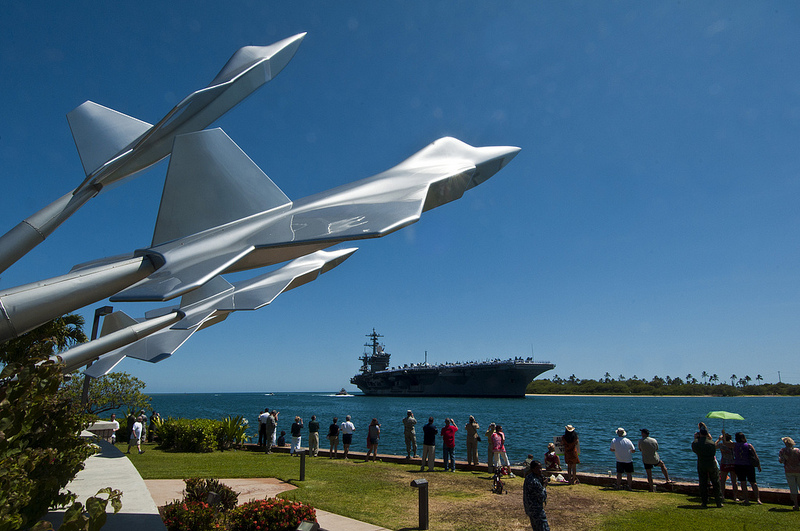 An Alaskan Raptor suffered a landing accident at Hawaii. A U.S. Air Force F-22A Raptor, belonging to the 3rd Wing from Joint Base Elmendorf-Richardson, Alaska, deployed to the Hawaii to take part in the Sentry […]

The F-35 Lightning II Pax River Integrated Test Force conducted the first weapons separation test of an AGM-154 Joint Standoff Weapon (JSOW) from an F-35C. On Mar. 23, during flight 180 over the NAVAIR Atlantic […]