At 22.30LT, on Apr. 30, 1982, the first engine of some 13 Hadley Page Victor K2 Tanker aircraft spooled into life and announced the start of one of the RAF’s greatest missions of all time.

It all started a few weeks previously, when some Argentinean scrap metal merchants had claimed some remote British Islands called South Georgia in the name of Argentina. It culminated in General Leopold Galtiere invading the British dependency of the Falkland Islands and claiming them. Britainwas outraged and the “Falkands Conflict” began.

A naval “Task Force” was rapidly assembled and set sail fromPortsmouth and many other Naval bases. The task force comprised two carriers, the HMS Hermes and the new HMS Invincible, and a multitude of other destroyers, frigates and tankers that were called back from where ever they were worldwide and all set sail for the South Atlantic.

Rather conveniently, at around the halfway point to the Falkland Islands is the British dependency of Ascension Island, a volcanic outcrop right in the middle of the Atlantic fairly close to the equator.

The Island is dominated by a dormant volcano and an airstrip with an unusually long runway, built by the Americans as a divert runway for the Shuttle program. The sleepy airfield was about to become a lot more busier, with the British establishing an air bridge connecting Wideawake (Ascension Island Airfield) with the UK, bringing in tons and tons of supplies for the task force heading south.

Whilst all of this was taking place, the RAF was looking into how they could get involved with what was up until now a naval affair. They looked at the aircraft they had at their disposal and only two had the endurance to be able to attack the Argentinean forces on the Falklands.  They found that the AVRO Vulcan had the range and the capability to carry a conventional weapons load but it had not been used in the conventional bombing role for years.

Their crews had been trained for the delivery of Britain’s nuclear deterrent which, during the late ’60s early ’70s, was taken up but the Royal Navy with its nuclear powered Polaris armed Subs.

They had a problem though, the Vulcan was ear marked for destruction which had started to take place with aircraft being broken up for scrap when the conflict broke out. This process had to stop and now.

The next headache was how was the Vulcan going to reach the Islands.

It was too politically sensitive to base the bombers from a neighbouring South American country, so, the only alternative was the airfield on Ascension Island which was some 4,000 miles away form the Islands.

It became obvious that air-to-air refuelling would be required. That was not a problem: at the time the RAF had a fleet of some 20 (ish) Hadley Page Victor K2 tanker aircraft, itself a bomber in a previous life, with the required range and the refuelling capability.

There was a big problem however: the in-flight refuelling probe had been removed from all of the Vulcan fleet as it was deemed not necessary for its intended mission of delivering a nuclear device to Russia and the refuelling system had been filled with concrete.

It took a super human effort to locate enough refuelling probes and the required pipe work for the bombers, but after every warehouse, hanger, nook and cranny and even museum exhibits were robbed of their probes and piping the task was completed.

The refuelling systems were fitted and tested and after a few mechanical issues found to work, the next issue was the crews, non of which had ever done in flight refuelling, let alone at night and in radio silence, as would be required in any mission. The crews were given 2 weeks to be trained and “signed off” for in flight refuelling, both day and night, a very very tall order which involved a very high amount of flying time for the crews. But it was achieved.

The possibilities that the RAF could be able to deliver a weapon to the Falkland Islands had improved. But what was going to be attacked?

It was now that the airfield at Port Stanley became a target.

The bomber would deliver its stick of 21 bombs at a 30 degree angle to maximise the chance of placing one or more bombs (no laser guided munitions) onto the runway.

A very complex refuelling plan was devised to get the Vulcan all of the way to the Falklands, which involved some 13 Victor Tankers and two Vulcan Bombers (2 spare victors and 1 spare Vulcan).

All of the tanker aircraft were deployed to Ascension Island, where they flew a number of reconnaissance missions over South Georgia and the Falklands, looking for Argentinean naval vessels. Whilst this was taking place the Vulcan’s were on their way to Ascension fully armed with 21, 1,000-lb bombs after a last minute change of heart to medium height bombing on the runway.

Apr. 30, 1982 would be the day for the mission code named “Black Buck”. So, at 22.30, 13 Victor tankers and 2 Vulcans left Ascension Island and headed south. During the flight south, the primary Vulcan developed a fault forcing the back-up plane (XM607) to relieve it. Also at this time it was found that the Vulcan was burning more fuel than it was thought, which meant that at the final refuel, the Victor gave the Vulcan enough fuel to do the mission and then turned back for Ascension. The crew knew they didn’t have enough fuel to get home but due to radio silence were not able to raise the alarm.

The Vulcan continued towards its target and dropped to low level to evade detection but, due to the rather old navigation equipment the crew were not exactly sure of their exact position. The only way to work this out was to pop up, do a single sweep of the radar, and drop down again.

The jet was now only minutes from its target and found itself only a mile off course. A correction in course and then the jet slammed into a steep climb up to middle level where it released its weapons.

Once the final bomb had left the bomb bay the Vulcan turned for home. The stick of bombs placed one bomb onto the runway and placed the runway out of action for fast jets: against all of the odds the Vulcan had delivered an amazing attack that took Argentina and the rest of the world by surprise.

Flight Lieutenant Martin Withers (the one in the center in the photo below) crew commander of the Vulcan was awarded the Distinguished flying cross whereas the pilot of the last Victor to refuel the XM607 (who flew knowing that they didn’t have enough fuel to return to Ascension and were later rescued by another Victor, launched once they could radio the message as the mission was already successful) got an Air Force Cross for the action. 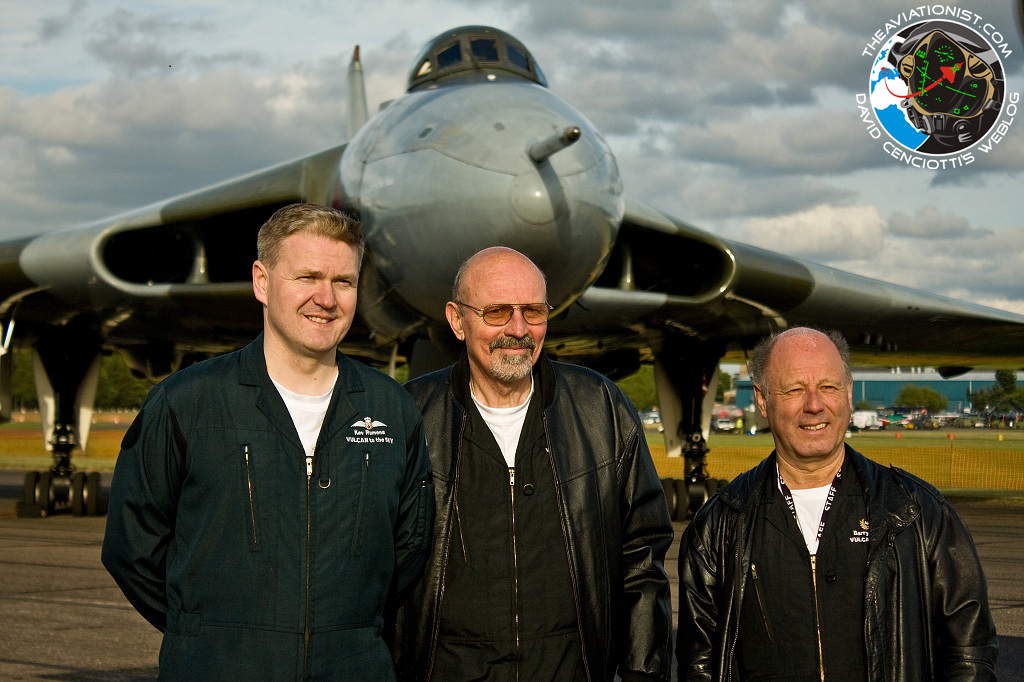