Bjørn Holst Jespersen (@bjoernen_dk on Twitter) is a long time contributor of The Aviationist.

He has helped me preparing the daily reports about the Libya Air War and has provided valuable analysis of the images of the U.S stealthy drone captured in Iran, to determine, using perspective drawing techniques, both the size and the orientation of the building where the RQ-170 was showcased.

This time, based on the article he has posted on his blog,  the Danish architect has offered the readers of  this website an interesting analysis of some (if not all) the weapons used by the Assad forces in Syria based on the images and footage he has collected in the last two weeks.

[Read also: Mysterious drone overflying clashes in Syria could be a new type rarely seen outside Iran. And here’s a new picture (maybe)]

The images below are screen-dumps from a video (@Brown_Moses must be credited for the head up).

They seems to be stems of large calibre mortar rounds. And by comparing to the size of the persons carrying the ordnance-parts they appear to be more than 200 mm.

Wikipedia has a list of heavy mortars. It is not long, and the only “active” mortar listed of a calibre of this size is the Russian made towed 240 mm mortar M240 or the later self-propelled 2S4 (also 240 mm calibre).

Image and drawings of mortar round form British Ordnance Collectors Network.  image of  2S4 mortar is screen-dump from video on BitnikGr’s channel.

Bjørn says this is the largest calibre mortar still being used worldwide. And even if it is said to have some accuracy in this context he believes it can be categorized as an “indiscriminate weapon”. Probably aiming at terrorizing the people in the besieged areas through general destruction.

On Feb. 10. 2012, the U. S. Department of State published a series of satellite images showing artillery deployed by the Syrian regime against different cities. The image above is one of two related to Homs.

According to the image presented as identifying the type of artillery deployed it is a Russian 122 mm howitzer.

Howitzers are characterized by having a muzzle velocity of the projectile that is slower than other cannons. They fire their projectiles (shells) at a higher angle which makes the projectiles hit at a steeper angle. This makes a Howitzer capable of hitting targets where the direct line of fire is blocked – in this case – by buildings.

The image above shows a fragment of a stabilizer-stem from an artillery shell. For comparison purposes, a drawing of an example of a 122 mm grenade is on the left on the same illustration. But please notice: the specific weapon it was fired has not been identified.

Artillery shells are NOT just oversized rifle projectiles: as can be seen in the illustration above, they are complex objects launched by a cannon using an explosive charge. For easier understanding they could be called cannon-bombs.

Just to give readers a basic idea, a typical shell carries an amount of high explosives (maybe 25% of total weight) that is detonated at impact by a fuse-mechanism. When the shell explodes the steel case is blown apart – fragmented – into melting hot pieces of shrapnel. And the purpose of the shrapnel is to kill or wound persons, which it does. The blast itself will also kill or wound people, but within a smaller radius compared to the shrapnel. Primarily it will cause material damage were it hits.

According to the photo above, the weapons deployed here is the Russian made multiple rocket launcher BM-21. It launches the 122 mm so-called Grad missile. Here is a link to a video showing how it is operated.

Grad missiles are a continuation of a rocket type Russia/ Soviet Union began producing during WWII. Back then the Soviets nick-named it Katyusha which is still sometimes being used. Generally speaking, Grads are relatively powerful, cheap to produce, fast to fire, slow to load and inaccurate.

Today’s Russian Grads are about 3 meter long and weight about 70 kg. They have a range of up to 40 km (Iran has made models with range up to 75 km). Typically they will explode and fragment on impact (see description of shells above), but they can also be used to carry cluster bombs, mines or chemicals.

“To my knowledge, firing Grads into a city can only be described as an indiscriminate attack,” Bjorn says who also adds “I haven’t seen any photo-documentation of Grad missile fragments found inside Homs, but Katyusha rockets have been mentioned in reports. 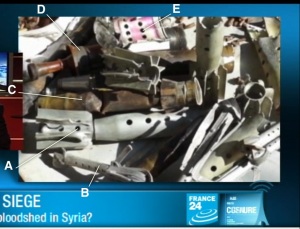 The image above is a screenshot from France 24, February 22/23. A group of Syrian opposition fighters/defenders in Homs showed some of the ordnance fragments they have collected.

Here’s Bjorn explaination of what A, B, C, D and E could be:

A: I’m quite sure this part is from a munition like the one in the image below. If so; then it’s a 73 mm grenade. Here is a link to a Pakistani version. I have also noticed that that the Russian made  BMP-1 (an infantry fighting vehicle) has a 73 mm gun. And since the BMP-1 have been in several videos I believe those are the ones that have been firing them.

B: stabilizer from a RPG-7 (Rocket Propelled Grenade, mainly used against tanks and other armoured vehicles).

D: tail end of a 73 mm PG-9. This too is main gun ammunition for the BMP-1. Notice the two broken off fins in the center frame below. Fragments of this ammunition seems to be less common than those of the grenade/rocket under “A“. An explanation for this could be cost: by the look of it this type of ammunition appears much more sophisticated in design and must be significantly more expensice to produce.

E: this one has an unusual colour. It seems to me like it is some kind of tube with holes that have been cracked and partly flattened. The original diameter of this part can not have been more than about 5 cm. I don’t expect to be able to id this one, but I believe it is from the rear-end of either a mortar shell or a small missile/rocket.

Screenshots from this video on syriapioneer’s channel

Two frames stitched together showing a series of explosions said to be from the same shell or rocket. Although some believe that cluster bombs could have caused them, according to Holst Jespersen this video linked by @ArabSpringFF seems to show that the number of sub-munitions is lower and more separate than usual cluster bombs.

Photo tweeted by @ArabSpringFF on february 8. for identification.

Here’s Bjorn explaination of what A, B, C and D could be:

A: these are parts of a mortar stem, and judging from the images I’ve seen it’s a type of shell that is used very often in this conflict.In another photo, I believe I have been able to measure the size of the fins to be more than 100 mm and less than 130 mm. And to my knowledge this will make it a shell for a 120 mm mortar. That is the largest caliber among the mordern infatery mortars in Wikipedia’s list and it could look something like this.I have not been able to determine the specific shell-type but here is an example.

C: these two parts seems to match a 107 mm rocket that have been identified by New York Times journalist C. J. Chivers in this blog post. And here is a video to get an idea of how it works. And another that I just couldn’t resist linking to.
Apart from flying in the general direction it is pointed, this weapon has no precision, which will make it an indiscriminate weapon in this context.

D: when comparing this to the one marked “C” there is no doubt this is of a larger calibre. To my knowledge there are only two to choose from (more or less): 122 mm and 152.4 mm. And since I believe the step up to the 152.4 mm to be too large I’m leaning towards this being from some kind of 122 mm calibre shell or rocket.

The following video was sent to The Aviationist from another source. It shows what look like S-5K rockets. These rockets could come from the Mi-24 Hind helicopters seen overflying the area of the clashes, even if this is just speculation since no video of aerial attack has emerged so far .

This video was uploaded on Mar 30 and is said to be from Homs. Bjørn believes the tank has fired one round just before the video starts – and later the footage shows three more rounds being fired.

The tank seems to be a T-72, but the video is a low-resolution one to rule out any other Russian T-model.

Left: image of a 125 mm tank shell from here. Right: frame from video posted above.

Assuming it’s a T-72 it will most likely have a 125 mm smoothbore main gun, and it could be firing shells like the one in the image above. More examples here.

It is not clear to me what has happened up to this, but during the video there is no sounds of other weapons being fired or any other sign of provokations, which make it look like this shelling is random terror.