The US Congress has approved legislation that will allow drones greater freedom over US airspace. The bill will give guidance to the Federal Aviation Administration over the next 4 years and give it the authority to open up greater areas to UAS (unmanned aerial systems). Worth some $63.4 billion, the bill includes some $11 billion to update the air traffic control system and achieve greater safety and collision avoidance in crowded airspaces by means of GPS-based ADS-B rather than radar control.

This would allow MQ-9 Reaper units, that are currently compelled to operate away from their main operating bases (with consequent logistical trouble due to having to ferry personnel to areas which can provide the unhindered training environment), the opportunity to exploit nearby stateside airspaces.

It was during operations over Libya in 2011 that aircraft enthusiasts all around the world became aware of the ability of the pilots of Global Hawks and Reapers to talk to local Air Traffic Control pretty much in the same way a normal manned aircraft would do getting clearance to gain altitude or to transit their controlled air space to waypoints: not only drones requested special corridors (advertised by specific freely available NOTAMs) and altitudes well above those that normal civilian air traffic would ask for, but, quite often, they radioed the aircraft type in the clear when requested by the ATC controller.

This is how unmanned systems will probably operate in the future over the de-restricted airspace: the pilot in his/her ground control station will ask for clearance from Air Traffic control to transit to and from firing ranges and other training facilities which would have otherwise been out of bounds.

The US Department of Homeland Security already use drones to patrol both Northern and Southern borders of the US but the de-restriction of unmanned aerial systems could lead to a greater employment of drones where it was supposed to be limited because of safety concerns.

As pointed out in previous articles, the extensive use of drones doesn’t seem to reduce error occurrences that are the main cause of aircraft crashes within the U.S. Air Force. According to a recently published report about 30 percent of airmen who control drones have been experiencing emotional stress caused from long hours of work.

Are we sure it’s time to open crowded airspace to an impressive fleet of (possibly armed) robots in the hands of operators that are “on the edge of mental illness” because of the tight shifts?

Other countries also limit the use of unmanned systems in their airspace, the UK being one of them which provides a small area over the Irish Sea for the training of UK personnel on WatchKeeper and other unmanned systems. 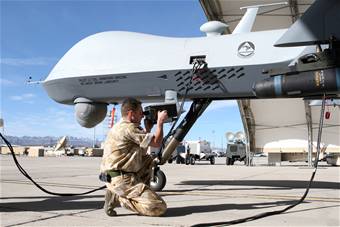 Reports coming out of Seoul suggest that its reclusive neighbour North Korea has started to wage a jamming campaign against the most wired country in the world, with the intention of jamming GPS signals. 553 […]

Behind the Scenes: What It's Like Inside a Predator Drone Control Station

Once closely guarded military secrets, remotely operated Unmanned Aircraft Systems (UAS) are now widely known to play a vital role in modern wars. But even while most people recognize that UAS are extremely important, they […]