Pictures taken at Axalp always rise the same question: people want to know if the condensation clouds surrounding the aircraft represent some kind of visual manifestation of the “sonic boom” or some other phenomenon related to the flying at transonic speeds.

Actually, what appears in those pictures is just the effect of the quick depression on the flight surfaces that brings the water vapour contained in the air to the condensation temperature. 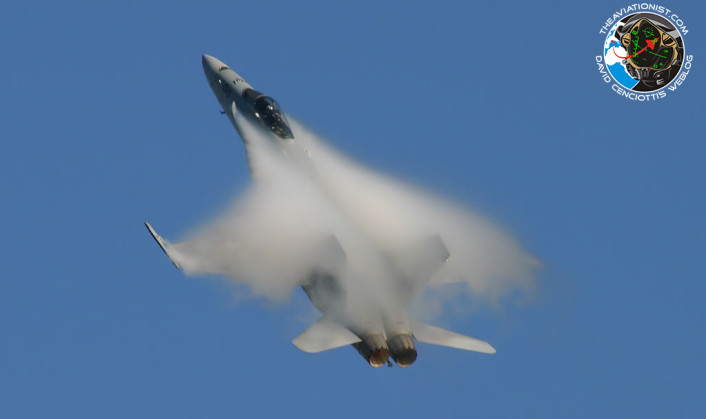 It is a common phenomenon in high-G maneuvers well below transonic speed, when the depression on the upper side of the wing increases fast; it can even be observed at sea level, provided the amount of moist is significant and the air temperature is hot enough. 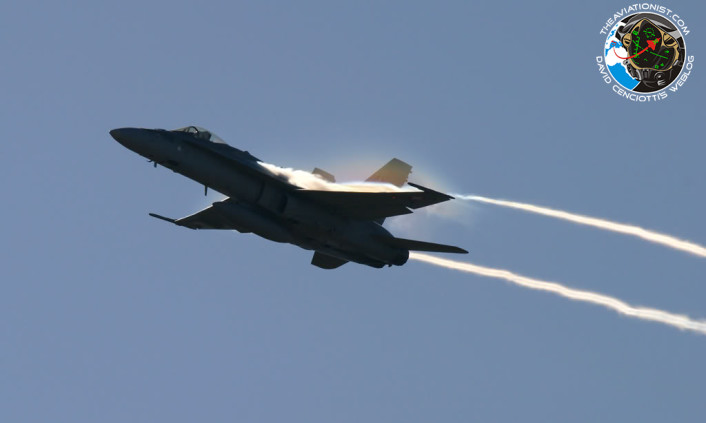 Something quite different are the conic-shape clouds that are generated by aircraft flying at speeds next to the sound’s speed (like the ones in the top image, depicting a B-1 at Pensacola airshow in 2003).

They are not visual effects of the so-called “sonic booms” nor are they the sign of the breaking of the sound barrier: when an aircraft flies at transonic speed (around Mach 1.0), any of its convess parts (canopy, intakes, etc) cause a rapid decrease of the temperature and pressure with subsequent creation of the cloud.

The variation in temperature caused by the perturbation of the airflows is called Prandtl-Glauert Singularity. The particular shape of the cloud associated to the singularity is caused by shockwave generated where the air flow reaches supersonic speed.

The following video shows a series of pictures the clouds caused by the Prandtl-Glauert Singularity:

Here’s how NASA describes the phenomenon: “The shock wave forms a “cone” of pressurized or built-up air molecules, which move outward and rearward in all directions and extend all the way to the ground. As this cone spreads across the landscape along the flight path, it creates a continu­ous sonic boom along the full width of the cone’s base. The sharp release of pressure, after the buildup by the shock wave, is heard as the sonic boom. The change in air pressure associated with a sonic boom is only a few pounds per square foot — about the same pressure change experienced riding an elevator down two or three floors. It is the rate of change, the sudden changing of the pressure, which makes the sonic boom audible.”

Actually, the “sonic boom” has nothing to do with the sound barrier (and there’s no “barrier” at all, either): it can be heard when the aircraft is ALREADY flying at supersonic speed not far from our ears.

The following video gives an idea of the sound of a Concorde flying at supersonic speed heard from the ground: