The F-106 Delta Dart was the primary all-weather interceptor aircraft for the United States Air Force from the 1960s through the 1980s.

The Convair F-106A was a very extensively revised version of the company’s delta wing F-102A: fitted with a smaller wing and a completely new fuselage, the Delta Dart was powered by the Pratt and Whitney J75 engine which provided a speed of well over 1,300 mph at high altitude.

Developed to avoid the saturation of the U.S. skies with large formations of Soviet bombers, the Genie would have been launched on a lead-collision flight path against its target. With its 1,5 kilotons warhead, the maximum AIR-2 lethal radius was about 1,000 feet.

The U.S. Air Force Brigadier General Bill Rutledge, USAF (Ret.), was a former F-106 pilot and even if he never carried a “live” Genie shot, he fired an ATR-2A, a Genie with some ballast replacing the warhead but with the tracking equipment installed.

Rutledge released his impressions about firing the ATR-2A to Ted Spitzmiller, who reported them in his book Century Series The USAF Quest for air supremacy 1950-1960: “It was amazing, an 832-pound rocket with a 35,000-pound thrust rocket motor. When that rocket motor fired, there was an instant contrail out in front of my aircraft. The standard load for an F-106 was four AIM-4 Falcons (two G models-heat seeking; and two F models-radar guided) and a Genie. Primary weapon was the Genie-a nuclear air-to-air rocket.”

As explained by Rutledge the fire control system calculated a launch point and heading to effect proper launch, set the time of flight before detonation, and automatically launched the AIR-2A Genie. Then the pilot performed one of several escape maneuvers, depending on altitude, to keep himself out of the fireball.

Another former Delta Dart pilot, Daniel R. “Doc” Zoerb recalled his experience with the ATR-2A: “We fired the (practice) Genie against high-speed, high altitude drones, most challenging of which was the Bomarc at about 70,000 feet and mach 2.5. The experience of feeling the weapons bay doors open, the “clunk” as the 850 pound rocket fell from the bay, and the audible (even in the cockpit) roar as the rocket motor lit was quite an experience, as was the speed and smoke trail that allowed you to maintain visual contact with the rocket til the spotting charge exploded. As I recall, the distance to the target at rocket launch…was about 7 or 8 nm at high altitude. The Genie accelerated to twice the launch Mach (which was circa 1.5 Mach) in a two-second rocket motor burn…a real bullet!” 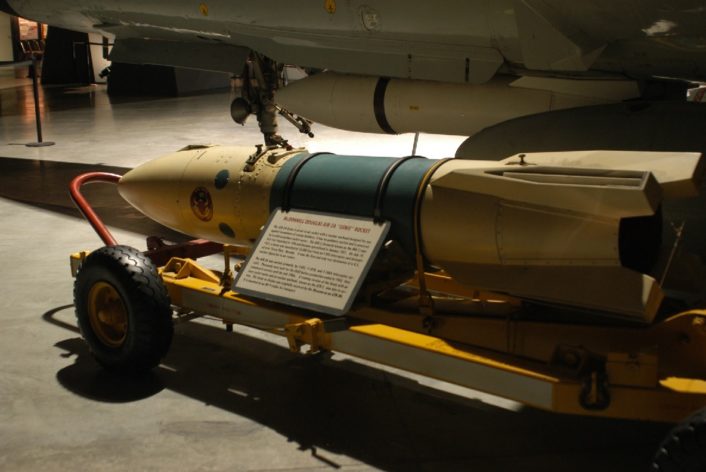 As Zoerb explained, since the Genie was a nuclear warhead rocket, its detonation in the vicinity of any type of enemy aircraft would have had a negative effect on its electronics, on its structural integrity and on the desire of the target to continue its mission. The effects on friendly fighters, unaware of the Genie launch, would have been unpleasant too, with temporary blindness of their aircrews being the biggest fear. Hence the eye patch carried by the F-106 drivers in the survival vest in hopes of preserving sight in at least one eye.

The F-106 was also a very fast aircraft which featured a supercruise ability as Mark Foxwell, another former Delta Dart driver, explained: “I recently visited the 27 Fighter Squadron at Langley, flying the F-22. They touted the Raptor’s supercruise capability, where they use AB to take it well supersonic and then cruise supersonic in military. Well I/we did that routinely on the Six (as the F-106 was called its pilots); I would take it in full AB to 49,000 and Mach 1.5, then go to full mil and cruise supersonic for 500 miles or more.”

Furthermore Foxwell added that in his opinion the F-106 was a bomber interceptor better equipped than today aircraft, since the Delta Dart was optimized for its job of “anti-Soviet bomber defense” more than anything in its day and more than anything today. In fact, as he explains, even if the F-15 and F-16 had (and still have) greater firepower, radar and computer capabilities as does the F-22, these fighters are not suited for the Strategic Air Defense mission and the F-106 could match or exceed them in speed, range and endurance.

According to Foxwell “ the 106’s speed and rage gave us the ability to ‘…get there the firstest with the mostest,’ which of course is how the Cold Wars were won.” 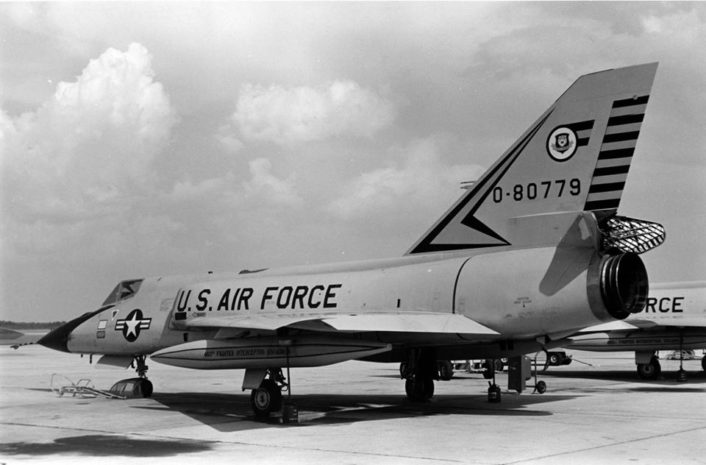 Before Deploying To Latvia, Two USAF A-10s from 107th FS Flew Over Normandy For D-Day 74 Ceremonies

Before deploying to the Baltic region, two A-10 Thunderbolt II aircraft flew over the beaches of Normandy, France, as part of the commemoration ceremonies for D-Day 74. Eight A-10C attack aircraft from the 107th FS […]

First In, Last Out: The Story Of The SEAD Missions Flown By The F-105 in Vietnam

Here’s why Wild Weasel missions were among the most dangerous sorties flown in Southeast Asia. During the Vietnam War the main threat to the strike packages was the V-750 (S-75) Dvina, the first effective Soviet surface-to-air missile […]