RAF Jaguar receives the letter code group of a WWII Hurricane fighter which took part in an audacious operation against Axis forces.

For RAF 238 Squadron, the current custodian of “Pinky” XX725, one of Royal Air Force Cosford’s Sepecat Jaguars and a Gulf War Veteran, 2016 marks an important anniversary.

In fact, 75 years ago the unit deployed to the North African desert, where it remained on continuous operations for almost three years taking part in some of the most significant engagements in the North African campaign, including the Battle of El Alamein. 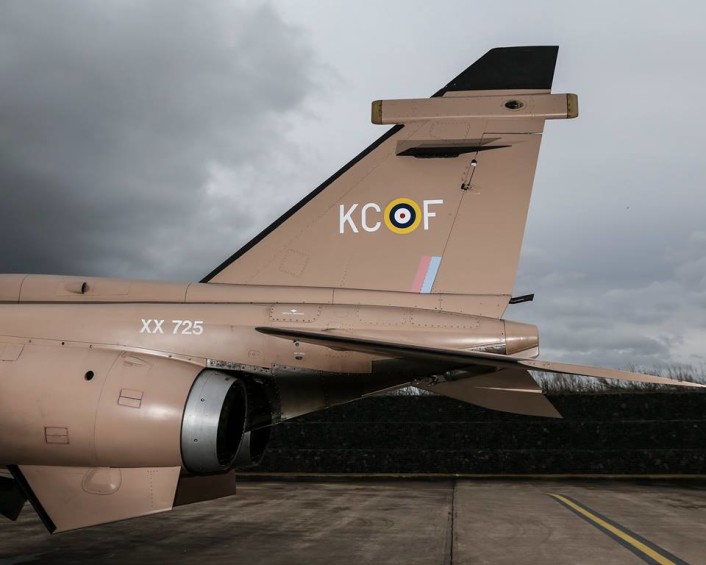 This little known operation was undertaken after El Alamein when, with Axis forces in full retreat, any enemy target became very difficult to destroy because of the poor loiter time over the battlefield of the allied aircraft. So a commando-type airfield was established 400 miles behind enemy lines, from which the allied aircraft could attack the Axis troops. From this austere airfield, 238 Squadron Hurricanes, along with those belonging to another RAF unit, were able to destroy more than 300 vehicles and 14 aircraft with only 3 Hurricanes being lost from the 36 which took part.

To remember this audacious operation, the historic Squadron letter code group and roundel has been applied, in vinyl, to the fin of XX725. In addition, Squadron Leader Marples’ name has been applied beneath the cockpit.

Noteworthy, whilst no longer on front line duty with the RAF, the Jaguar jets are still used at RAF Cosford to help train the next generation of aircraft technicians and engineers.

An interesting image of Camp Bastion eerily still as a sandstorm approaches one of the main strategic bases in Afghanistan. As already explained, sandstorms move extremely fast and can completely darken large areas in a […]

RAF Jaguar confiscated by the Italian Customs in Ancona

On Feb 6, a RAF Jaguar, was found by the Italian Guardia di Finanza in the Ancona harbour and blocked before being embarked on board a cargo ship with destination Patras, in Greece. The aircraft […]