A CSG can fulfill a wide variety of tasks such as projecting power, deterring crisis, promoting regional partnerships and maritime security.

To carry out these duties, Carrier Strike Groups are formed and disestablished on an as-needed basis, and one may be different from an other.

However they all are composed of similar types of ships and those that a CSG always has are shown in this infographic.

The core of the CSG is of course the aircraft carrier, that provides to the U.S. Governemt a tremendous firepower thanks to its embarked Carrier Air Wing (CVW) which can attack airborne, afloat and ashore targets. Furthermore the aircraft don’t need to secure landing rights on foreign soil since the flattop operates in international waters.

The ships intended for aircraft carrier protection are the Tomahawk equipped Ticonderoga-class cruisers, which are multi mission surface ships able to perform long-range strikes, and the Arleigh Burke-class destroyers, primarily used to defend the CSG from airborne threats.

Even if they are not shown in the infographic, a Los Angeles-class attack submarine (for anti-submarine and anti-surface warfare) and a supply ship (for logistic support) are usually part of the Carrier Strike Group.

Thanks to the capabilities provided by this impressive naval force a CSG is able to gain and maintain sea control in every sort of modern conflict. 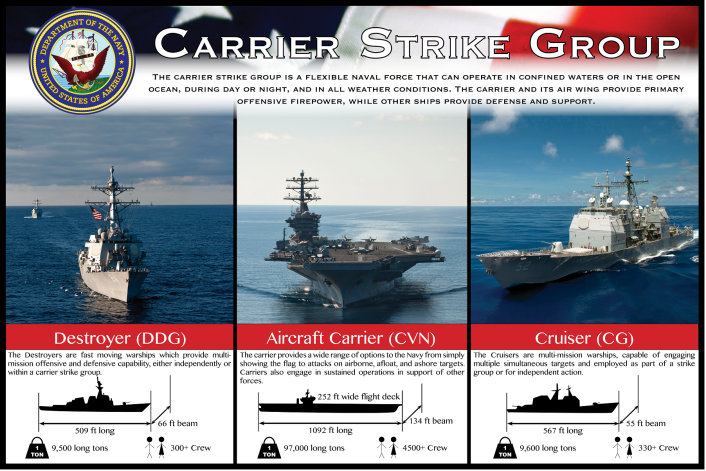 Not as large as U.S. flattops but 280 meters in length hence longer than the London’s Palace of Westminster: this is the size of HMS Queen Elizabeth and Prince of Wales, UK’s Royal Navy future […]