All the PAK FA armament in a single infographic.

Not only does the Sukhoi T-50 PAK FA feature stunning maneuverability. As this interesting infographic shows, the fifth generation stealth multi-role combat plane will carry a wide variety of weapons, including air-to-air, air-to-surface and anti-ship missiles.

Among those that the PAK FA will be able to carry (internally or externally – hence “stealthy” or not), there are: the Izdelie 810, a derivative of the R-37M designed to kill High Value Targets and AWACS at a distance of 400 km; the K-77M air-to-air missile fitted with an AESA seeker; the KH-35UE anti-ship cruise missile; the KH-58UShKE stand-off anti-radiation missile; the Brahmos-NG supersonic cruise missile produced with India; and the KAB bombs. 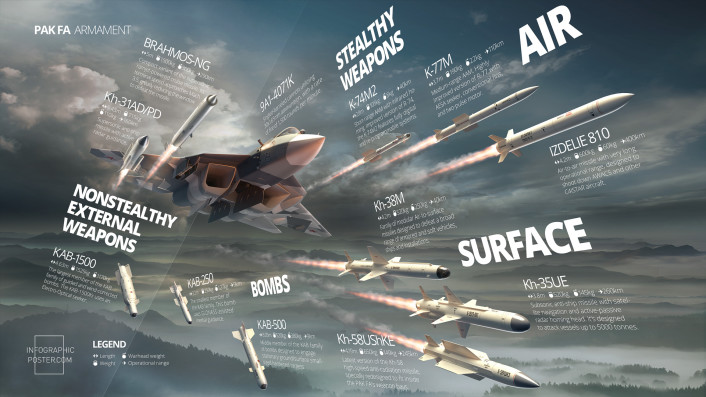 Have you put aside some 5 million USD? Then you can buy a Tupolev Tu-95 Bear. The item is listed as used but shipping cost from Ukraine is included. The “Buy it Now” price is […]

Someone Opened A Cargo Hatch And Stole Radio Equipment From An Il-80 Maxdome, Russia’s “Doomsday plane”