155 passengers were on board the aircraft: 137 adults, including 2 pilots and 4 cabin crew and 1 engineer, 17 children and 1 infant.

According to Indonesia’s Transport Ministry, while flying at FL320 (32,000 feet), QZ8501 requested to deviate and climb to FL380 to avoid very bad weather in the area. Clearance to climb could not immediately be granted because of nearby air traffic.

The Ministry said the aircraft could be tracked by ADS-B until 06:18, when it went missing from radars. Flight crew did not radio any mayday or emergency message.

Noteworthy, a leaked ATC image published by Gerry Soejatman on Twitter shows the AirAsia flight climbing through 36300ft with a Ground Speed of only 353 knots: provided the image is genuine, the radar screenshot would show an airplane much slower than expected at that altitude (a nearby Emirates flight at FL360 – 36,000 feet – was flying at 503 knots). 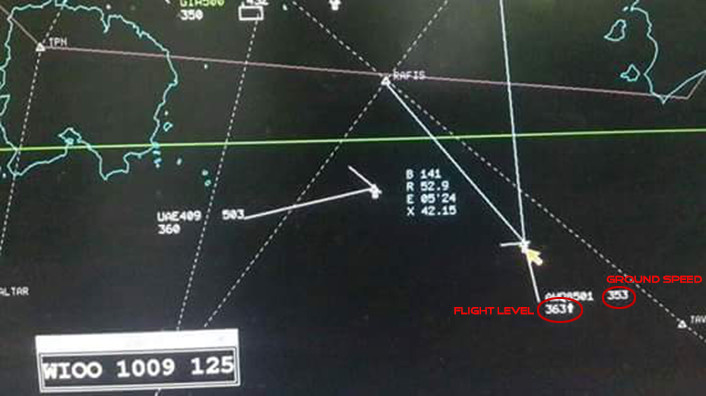 Although any attempt to explain the reason for the disappearance of the AirAsia flight is pure speculation at this time, we can’t but notice at least one apparent similarity with another famous crash: Air France 447.

AF447 was an Airbus 330 from Rio de Janeiro to Paris that plummeted 38,000 feet in 3 minutes and 30 seconds and crashed into the Atlantic Ocean in 2009. In that case, pilots responded to a stall, induced by inconsistencies between the airspeed measurements likely due to pitot tubes being obstructed by ice, by pulling the nose up instead of pushing it down to attempt a recover.

Even though a low Ground Speed can be caused by strong head winds, the fact that nearby Emirates was cruising at 36,000 feet at a speed of 503 knots, seems to suggest that the missing Airbus 320 was probably too slow and closer to the stall speed than it should have been.

Anyway, although no sign of wreckage, oil, debris were found so far, experts believe there are more chances to locate the aircraft than the Malaysia Airlines MH370 which vanished in March this year and has not be found yet.

Can you believe neither Malaysian nor Thai radars saw the Malaysia Airlines MH370 crashing?

Malaysia Airlines flight MH370 might have flown for some time (from 2 to 5 hours, depending on the reports and sources) before disappearing. Provided this is true, why did nobody see a possible “renegade” plane […]