According to the satellite data the hijacked MH370 was last spotted flying towards Pakistan or Indian Ocean. But if it took the northwestern route there was only one way to be invisible to radars.

More than one week since the flight disappered from the sky, Malaysian authorities are now almost certain that Malaysia Airlines MH370 was hijacked: even though it’s impossible to say what happened aboard, the transponder and other communication equipment aboard the Boeing 777 9M-MRO were deliberately switched off to prevent identification by Air Traffic Control radars.

Even more interestingly, based on data coming from satellites, the aircraft could have taken two different routes: a northernwestern one, towards Pakistan/China, and a western one towards the Indian Ocean.

The northwestern route would have brought the plane somewhere along a route from the last recorded radar position west of Malaysia to a point on a great circle stretching from northern Thailand toward the Kazakhstan-Turkmenistan border. In other words, MH370 might have crossed some of the most heavily guarded airspaces without being noticed.

A Boeing 777 flying at 25,000 feet for seven hours crossing airways used by airplanes flying from Europe to Asia and vice versa and several airspaces surveilled by military and civilian radars, would leave a trace (and risk a mid-air or two on the way…)

The fact that it flew with a switched off transponder didn’t make it invisible: Air Traffic Control radars might have not noticed it (even if it is unlikely), but military air defense sites in most countries (Malaysia is probably not among them) do pay attention to primary returns that could be the sign of an unknown (or enemy) aircraft.

Provided the plane really went northwest, how did it pass unnoticed through the Indian or Pakistani airspace? 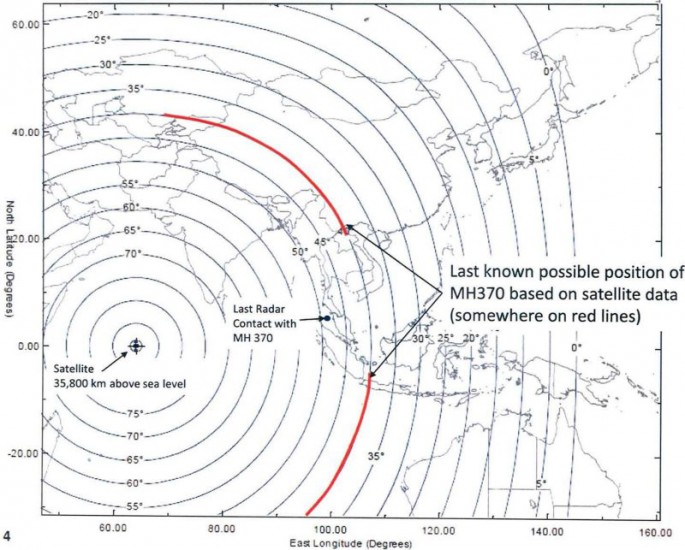 Even though I still consider it quite unlikely, one of the possibilities is that the Boeing 777 shadowed another plane it encountered along the route.

Closing on another liner is not a common procedure, nor is it easy to perform with a large plane. But it is not completely impossible and, above all, such a daredevil maneuver worth an action movie, would have made the MH370 invisible to military radars.

Since the hijacking was very well executed and planned, 8 days after it went off radar with no idea where the plane crashed or landed, we can’t completely rule out the possibility that the operation foresaw a rendez-vous with another plane unaware of MH370, that could provide the shield to the Malaysia’s 777 hiding behind it.

Obviously, the Indian route is more likely, making research much more difficult and raising a question: why did the hijackers brought the plane westwards? Where did they plan to bring it?

As I said on Twitter earlier today, regardless of its crash or landing site the whole story will eventually highlight either impressive negligence (by air defenses of Malaysia and several other nations) or cover up attempt (for instance because the aircraft was shot down).

As a side note: the whole story reminds me of Lost drama fiction’s Oceanic 815 (incidentally, a Boeing 777) crash on an unknown island.

Here are some pictures of the Airbus 380 in Malaysia Airlines colour scheme performing an impressive display at Farnborough Air Show 2012. The type of maneuvers, the moisty weather and the low cloud base helped […]