Even if the aircraft’s crash position could not be determined, Doppler effect analysis on SATCOM pings enabled INMARSAT to determine MH370’s final route over South Indian Ocean until a final, “partial ping,” received 8 minutes after the last known one.

Whereas search for debris from the missing Malaysia Airlines MH370’s Boeing 777 continues in a wide area located about 2,300 kilometers to the southwest of Perth, Australia, INMARSAT released new details to explain how the British satellite telecommunications company was able to exclude the so-called “north route” and focus on the southern one, pointing towards the South Pole.

As already explained on a previous post, hourly SATCOM system pings continued for more than 7 hours since the Loss Of Contact with MH370, until 08.11 AM LT.

Based on the round-trip times of such pings, two arcs made of all the possible positions located at the same distance from the INMARSAT satellite were drawn.

But it was further analysis, on Doppler Effect, as well as correlation between the “signature” of other B777s, that clearly indicated the aircraft southbound route.

The Doppler effect is something we are familiar without even knowing it. The sound of the ambulance’s siren or the train whistle are among the most common examples of how Doppler Effect works: the high pitch of the siren of an approaching ambulance suddenly drops as the vehicle passes you. Even if the source wavelength and speed do not change, movement of the source alters the wavelength and frequency of the sound.

You can use several online tools to calculate the frequency change induced by motion.

Since satellite pings are carried on a radio wave, the sensed wavelength, frequency increase or decrease depending on the fact the aircraft is moving towards or away from the satellite.

The difference between the expected received frequency and the actual measured one due to Doppler Effect is known as Burst Frequency Offset.

By comparing the Burst Frequency Offset due to Doppler on MH370 against the predicted one based on six B777s flying on the same day, INMARSAT could determine close correlation for the southern route and eliminate the northern one. 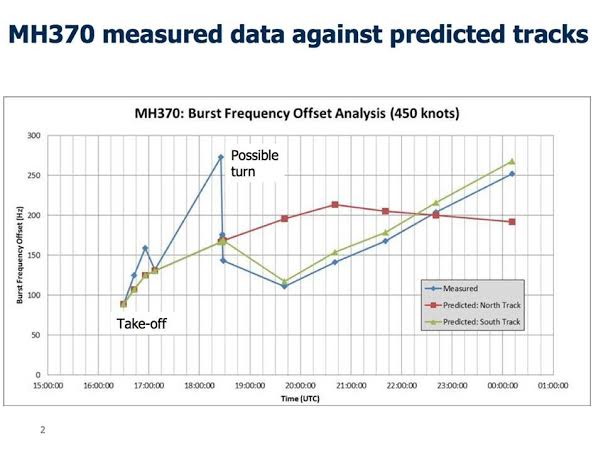 INFORMATION PROVIDED TO MH370 INVESTIGATION BY UK AIR ACCIDENTS INVESTIGATION BRANCH (AAIB)
25/03/14
[…]
As you have heard, an aircraft is able to communicate with ground stations via satellite.
If the ground station has not heard from an aircraft for an hour it will transmit a ‘log on / log off’ message, sometimes referred to as a ‘ping’, using the aircraft’s unique identifier. If the aircraft receives its unique identifier it returns a short message indicating that it is still logged on. This process has been described as a “handshake” and takes place automatically.
From the ground station log it was established that after ACARS stopped sending messages, 6 complete handshakes took place.
The position of the satellite is known, and the time that it takes the signal to be sent and received, via the satellite, to the ground station can be used to establish the range of the aircraft from the satellite. This information was used to generate arcs of possible positions from which the Northern and Southern corridors were established.

In recent days Inmarsat developed a second innovative technique which considers the velocity of the aircraft relative to the satellite. Depending on this relative movement, the frequency received and transmitted will differ from its normal value, in much the same way that the sound of a passing car changes as it approaches and passes by. This is called the Doppler effect. The Inmarsat technique analyses the difference between the frequency that the ground station expects to receive and that actually measured. This difference is the result of the Doppler effect and is known as the Burst Frequency Offset.
The Burst Frequency Offset changes depending on the location of the aircraft on an arc of possible positions, its direction of travel, and its speed. In order to establish confidence in its theory, Inmarsat checked its predictions using information obtained from six other B777 aircraft flying on the same day in various directions. There was good agreement.
While on the ground at Kuala Lumpur airport, and during the early stage of the flight, MH370 transmitted several messages. At this stage the location of the aircraft and the satellite were known, so it was possible to calculate system characteristics for the aircraft, satellite, and ground station.
During the flight the ground station logged the transmitted and received pulse frequencies at each handshake. Knowing the system characteristics and position of the satellite it was possible, considering aircraft performance, to determine where on each arc the calculated burst frequency offset fit best.
The analysis showed poor correlation with the Northern corridor, but good correlation with the Southern corridor, and depending on the ground speed of the aircraft it was then possible to estimate positions at 0011 UTC, at which the last complete handshake took place. I must emphasise that this is not the final position of the aircraft.

Here below is an INMARSAT image which shows the southern tracks for a ground speed of 400 and 450 knots ground speed. 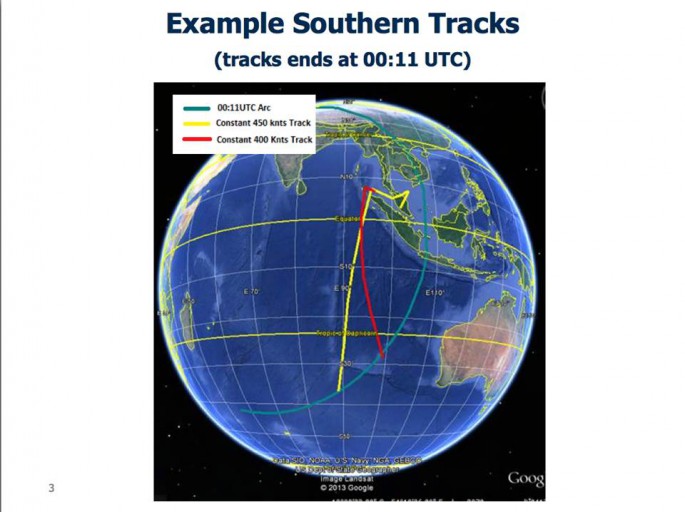 Noteworthy, INMARSAT collected  evidence of a partial handshake between the aircraft and ground station at 00:19 UTC, 8 minutes since the last acknowledged response. This partial ping is currently being investigated: there are several different theories, including the one that the final handshake was attempted outside of the hourly window, possibly at fuel starvation because of power fluctuations.

At 0115 UTC, when the ground earth station sent the next log on / log off message, no response was sent by the plane, indicating that the MH370 was no longer logged on to the network (because already crashed).

1) Pilots have the power to make aircraft almost invisible to radars. This will have to be addressed in some way, with some system capable to track the plane regardless of the aircrew’s willingness.

2) Black Box data have to be streamed via satellite and stored for the shortest time possible (until the next flight, then automatically erased) somewhere (for instance, in a Cloud Network architecture, to save money and have it immediately available, should the need arise).