Search efforts are currently focusing in an area several thousand kilometers to the southwest of Australia and possibly well beyond MH370 endurance.

Fifteen days after MH370 vanished while enroute from Kuala Lumpur to Beijing, no new clues surfaced about the route the aircraft flew past the last known position on radial 295, 200 NM (Nautical Miles) to the northwest of Butterworth airbase.

However, search and rescue forces from 26 countries seem to be focusing on the southern route, rather than the northern one, as if there are details, still unknown to the general public, besides the last SATCOM ping at 08.11AM LT, that may have suggested the investigators to concentrate in the South Indian Ocean.

That part of the world is probably one of the most challenging for a search operation, an area characterized by strong winds and currents, were the ocean bed is between 3,000 and 5,000 meters deep.

On Mar. 18, Chinese satellites spotted possible debris within the 10,500 square nautical miles currently being investigated but the object 22.5 meters long and 13 meters wide was not found by the aircraft dispatched from Australian bases to patrol the area: it could have drifted some hundred miles away or may no longer being floating.

Still, what’s worth a note is the area where the various satellites and maritime patrol aircraft (including a P-8 Poseidon of the U.S. Navy) have been operating in the last few days. Based on the coordinates on China’s satellite imagery (44° 57′ 29” S 90° 13′ 43” E) the slice of Ocean being patrolled is located some 3,130 Nautical Miles from the last known point.

The aircraft was last seen on radars at 02:15AM LT near IGREX point. Let’s assume that it immediately turned southbound (something we should rule out since the aircraft would have overflown Indonesia).

The area where satellites are looking is some hundred miles farther. The aircraft alone could not cover about 5,800 km in 6 – 6.5 hours (that is considered the residual endurance of the Boeing 777 from the last radar contact position) because it would have to fly at a speed exceeding its maximum speed (thus reducing its range, that was calculated basing on the typical cruise speed).

Do investigators believe the pilot set autopilot/speed and altitude hold in such a way to cover a longer distance? Or do they believe the aircraft has crashed northern but pieces drifted towards the Southern Pole?

As said, ocean currents and wind can transport objects many miles away in a direction that may be difficult to predict. According to this interesting piece, by Accuweather, there’s a broad northward current that, theoretically, could bring some pieces closer to Western Australia. 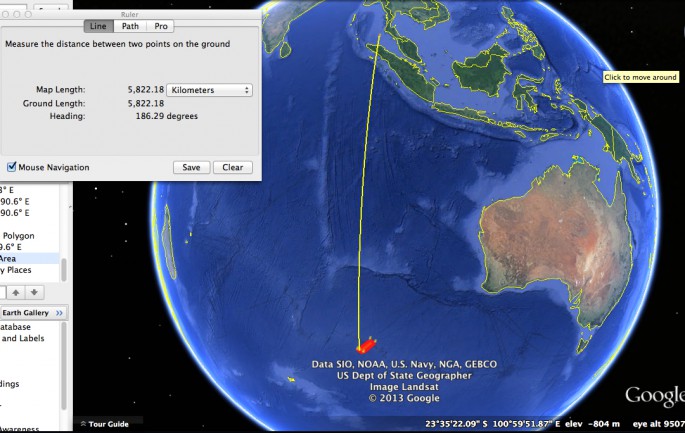 Analysis: what these signs on the wreckage tell us about the missile strike that downed MH17

Evidence of shrapnel damage to the Malaysia Airlines flight MH17 has emerged from images taken at the crash site. Photos taken at the MH17 crash site clearly show shrapnel signs on various parts of the […]