On Mar. 24, Malaysian PM officially announced that Malaysia Airlines MH370 crashed in southern Indian Ocean, where a satellite might have spotted its contrails.

A large and difficult operation involving both patrol aircraft and ships has been in progress for days in southern Indian Ocean, more than 2,300 kilometers to the southwest of Perth, Australia.

Which “sensor”, antenna or intel provided the hint to determine that the aircraft headed towards the South Pole, instead of following the northern route, is unclear. Anyway, Malaysia’s PM has officially confirmed that the area currently being patrolled is where the aircraft crashed after more than 7 flight hours.

Did the investigator have a look at satellite imagery, looking for some contrails? Maybe. For sure imagery of the visible and infrared channel were used to look for a sign of the “zombie” MH370 flight, as done by a meteorologist, by Tim Vasquez, meteorologist.

Since Mar. 17, in an attempt to find contrails of the missing Boeing 777, Vasquez has published some interesting images of the Indian Ocean on his website Weather Graphics.
Such images, “enhanced to compensate for the dim early morning conditions” were also posted to the Professional Pilots Rumour Network community. PPRUNE users found a signature of what resembled a contrail (barely visible in the top image: left, the feature without annotations, right with measurements and coordinates).

“Analysis of the METEOSAT7 imagery showed that this signature does bear a close resemblance to a typical early morning cloud shadow from a contrail onto the top of a stratified lower middle cloud layer, which given the appearance of double layers and a slightly cold signature on the IR channels appears to be a low overcast altostratus or altocumulus later at about 5 to 10 thousand feet beneath an mid-level inversion. This is in a region with virtually no air traffic, and no published air routes within several hundred miles,” Vasquez explains.

However, considering the limited resolution of the imagery, the signature could also be something else, including noise in the satellite data or the back edge of a cirrus bands type of cloud.

Interestingly, the suspected contrail falls precisely within the search area where satellites and patrol aircraft are concentrating.

Provided this is really a contrail, it would be generated by an aircraft flying a heading of 210° magnetic (track 196°): assuming that the MH370 flew the last few hours with autopilot in heading hold mode of 210°, Vasquez backtracked the contrail in time, back to the western Strait of Malacca, where a turn southbound was started for unknown reason past 2.15 AM LT.

Here’s the track of the MH370 reverse engineered by Vasquez:

Obviously, regardless to whether the one in the satellite is really an MH370’s contrail, the reason for a turn towards the South Indian Ocean remains a mystery. Especially if we consider that the aircraft, until 2:15AM LT, had followed a northern route.

An interesting detail to fuel theories that MH370 was using another wide body to escape radar detection. Maybe, until something went wrong. 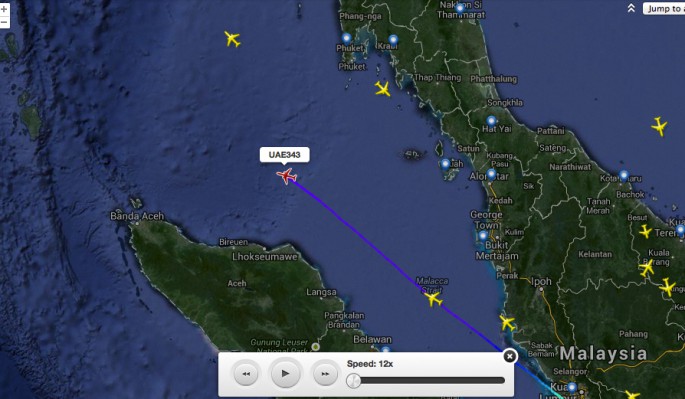