Ever wondered what the effect of a GBU-12 bomb blast may look like? The image above gives a hint.

The F-15Es of the 492nd FS dropped the bunch of GBU-12s at the military range of Cape Wrath, in the far northern border of Scotland, as part of a required pre-AEF (Air Expeditionary Force) deployment exercise.

U.S. Air Force pilots at Lakenheath would typically move to the U.S. to meet their weapons employment requirement before a tour of duty, but their mission this year was postponed due to sequestration, until if was determined that it might be more cost efficient to conduct the live munitions drop in the UK.

The JTAC acts as a sort of “middleware” between troops on the ground that require air support and the pilot: they work embedded on a patrol, in the vicinity of the enemy, in an armored vehicle, to direct air strikes against the proper targets talking pilot in such a way he/she can cue the weapons to the correct ground target (and avoid friendly fire or collateral damage).

Six F-15E flew the live bombing sortie in the morning and six in the afternoon, each carrying two live GBU-12 laser guided bombs: when the bomb is 10 seconds flight time from the target the laser is turned on and then spotted on the projected target to enable the bomb’s seeker to guide itself to hit the designated target.

The explosion on the rock creates a large cloud of dust and creates an infrared signature (as it would happen if a real target was attacked); for this reason the pilots have to wait for the cloud to die down before they can make another run on the target and drop the next bomb. 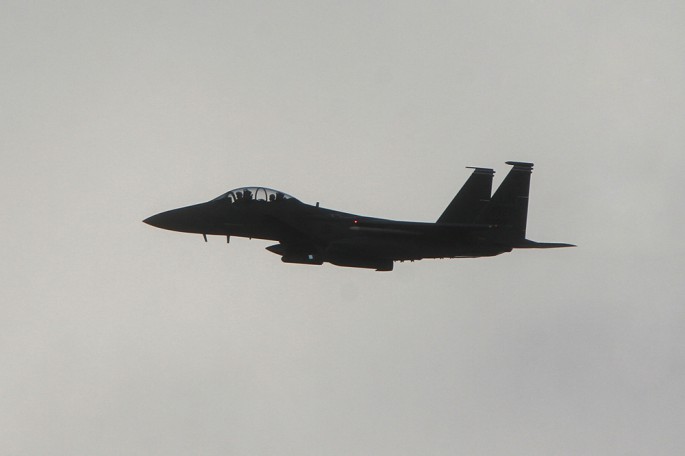 Boeing has successfully improved the performance of the 30,000-lb Massive Ordnance Penetrator. According to Bloomberg’s Tony Capaccio, on his annual report, the Pentagon’s director of operational testing Michael Gilmore has confirmed that tests conducted with […]

The following pictures were taken at Nellis Air Force Base, Nevada, on Jan. 31, 2013. They show a B-52H Stratofortress assigned to the 20th Bomb Squadron, from Barksdale Air Force Base, Louisiana, flying a Red […]